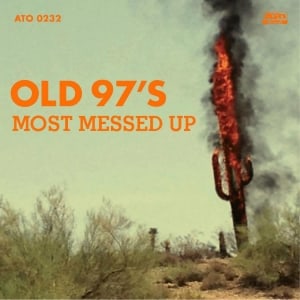 [xrr rating=3.5/5]After a decade of making solid (read: decent to good) records, the veteran alt-country band Old 97’s has put out Most Messed Up, a self-consciously funny slab of rock, littered with tales of middle age and the vagaries of endless touring. The upshot here is one of the best 97’s records since their semi-classic late-‘90s to early-2000s run from Wreck Your Life to Satellite Rides. Even when the humor misses and the band shows its wear, Most remains fresh and fun, an accomplishment as good as any they’ve achieved. And Rhett Miller foregrounds all this with an approach to lyricism that is best described as fuck it.

“Longer than You’ve Been Alive” recounts the band’s story, emphasizing “oceans and oceans of alcohol” and playing to half-empty venues and wholly-inebriated crowds. At its best, the album approaches the sort of Zen grumbles of Sun Kil Moon’s Among the Leaves, a present tense stream of complaints. “Most Messed Up” follows a similar path, and is super funny to boot. Other times, Miller forces us to confront a pretty unappealing image: a married man, with a child, singing about sex like a hormone-charged teenager. “Guadalajara” and “Wasted” feel a little embarrassing, and “Let’s Get Drunk & Get It On” is about exactly what you think it is. It’s not that these songs are bad, just unfortunate.

Thankfully, even when Miller flags, the 97’s pick up the pace. Most of these tracks can be easily classified as kick-ass, full of riffs and guitar solos. “The Ex of All You See” rides a simple 4/4 beat, Philip Peeples insistently pounding the snare. His marching-band rolls return on “Give It Time,” probably the best and most explicitly “classic” of the material here, a rollicking guitar part playing off a country bass lick. All of this ass kickery is enhanced by a rough production job, cymbals splashing and snares bursting from the speakers. It all feels very live (and very intentionally so) and befits the shaggy dog nature of the material.

Most of all, Most Messed Up is just a fun, driving with the windows down type of album with simple lyrics that are easy to memorize whether sober or wasted. These aren’t the same young men who courted major labels in the alt-country boom of the ‘90s, and the 97’s aim to remind you of that. Thankfully the band remembers to have a blast while it does, and the result is its first noteworthy album in a long damn time.