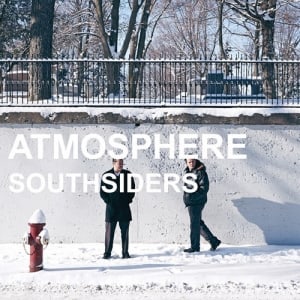 [xrr rating=3.0/5]Hip-hop is, for the most part, a young man’s game. With shelf lives comparable to NFL running backs, most MCs either don’t get the chance to bring it for any extended period of time, or can’t get beyond the one trick they carry in their bag. Now eight LPs in and having been at it since 1989, Atmosphere have earned the career longevity that can only come from versatility. There are better lyricists than Slug and rappers with quicker flow, but he’s always come across as the musician’s MC, never holding court in one spot for long, never relying on a single skill. Now in his 40s, Slug’s introspection still matches his maturity and intensity, while production partner Ant is making the most sophisticated and adventurous mixes of the band’s catalog.

It’s usually lazy to say a record builds upon its predecessor, but Southsiders truly is an evolution from 2011’s The Family Sign. The trend of live instrumentation continues, but with less of a live band feel, and that’s actually a good thing. While Ant’s production with The Family Sign sometimes felt at odds or in competition with Slug’s verses, here he’s much better integrated, more aligned to a record like Headshots: Se7En. Melody is clearly the focus, as Slug’s lines are delivered more slowly, spoken with the kind of precision that makes it clear he wants you to hear every word. In fact, he often comes as close to straight singing as you’ll hear today in hip-hop (see the anthemic “Bitter”). Though the result leaves an initial impression that Southsiders is softer around the edges, Atmosphere has enough tools in the box to survive.

With a family to support, mortality is on Slug’s mind, and Southsiders is about the struggle, the fragility of life. Slug rhymes like someone who’s made it through, but he’s still hearing the clock tick, and he doesn’t mince words. “I highly doubt y’all think about sex/ Anywhere near as often as I think about death,” he sings above shimmering organ and a two-chord piano vamp during “Fortunate.” The reaper that lurks is also a motivator, a sentiment he visits frequently. “We’re trying to get ahead before we get a headstone,” he laments with Dusty Springfield feel during “Let Me Know That You Know What You Want Now,” while the blues-y stomp of “Arthur’s Song” is about surviving the blizzard of life with music as his savior. “I’ve experienced a life full of accidents/ Try-na write it all down before it vanishes,” he raps. It can get a little repetitive at times, but thanks to Ant, Southsiders does not require Slug to score touchdowns on every play.

Though Slug has always been the face of Atmosphere, Ant’s production takes Southsiders from just another record to a very good one. With hooks as big or bigger than any verse, Ant has created a mix somewhere between ‘90s west coast rap, and Jurassic 5, playing an indie Ryan Lewis to Slug’s Macklemore. And he goes well beyond just beats, weaving in and out of Slug’s rhymes with serpentine doom or uplifting glory, bringing in elements not usually reserved for hip-hop (see the lounge-y trip-hop of “Mrs. Interpret”). Piercing guitars, thumping piano, swirling synth and angelic voices all find their way in, but without ever interrupting a song’s flow.

Though Ant doesn’t deliver any misses, he hits hardest during the record’s final third. He combines Meters funk with tumbleweed guitar during “We Ain’t Gonna Die Today,” while the Beach Boys-meets-Moby production of “Flicker” gives way to a catchy four-chord-hook allowing Slug to go verse-after-verse in tribute to his late friend, Eyedea. While the sinister piano variation of “Rock-a-bye Baby” during “January on Lake Street” is chilling, “My Lady Got Two Men” is the moment where rapper and producer truly come together. With a soulful two-chord hook pulsating with gospel organ, piano and guitars reminiscent of “You Can’t Always Get What You Want,” Slug bounces off the groove singing about how he isn’t his girl’s one and only, delivering some of his most memorable lines in a ready-for-radio jam.

“I’m lucky I’m alive just to represent/ And document my life in the present tense,” Slug raps during the psychedelic “The World Might Not Live Through the Night.” Though he’s likely singing about living in the literal sense, it’s also a telling line from a musical standpoint. Atmosphere isn’t still standing because of luck. They’re still at it because they never felt anyone owed them anything, and they were never afraid to be anything less than honest to a fault. Slug never stopped working, never stopped tinkering, building a career on the realization that everything comes back to the song, not him. And when you’re writing the rules, the game can’t pass you by.