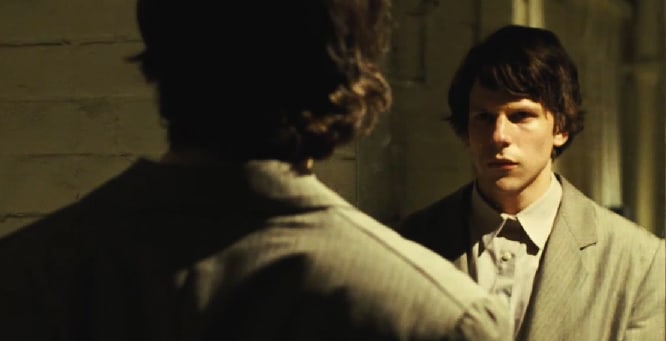 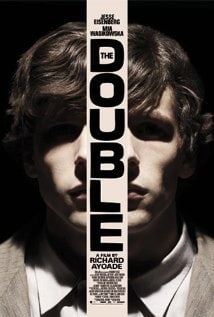 Are you unique? We’d all like to think so. But if someone couldn’t tell you apart from someone who, on the surface, was just like you, are you really different people in any meaningful way? Richard Ayoade’s new film The Double does not really answer that question, but it doesn’t pretend to. Although the movie is ostensibly a comedy, it’s not funny in a “haha” kind of way, and certainly not what fans of Ayoade’s work on “The IT Crowd” might expect. Instead, The Double is an exceedingly dark, unnerving examination of identity and how we define ourselves. It’s also an amazing, challenging film that shows a filmmaker making a giant leap forward into new territory.

The Double begins with admirable efficiency. The very first scene frames its protagonist, Simon James (Jesse Eisenberg) in a close-up shot that does nothing to hide the squalor of his surroundings. He’s riding a nearly empty commuter train bathed in sickly orange light. Despite the vacant seats, an obscured figure looms over him and insists that Simon is in his place; after a few feeble protests, he surrenders the seat and begins a day in Hell. It’s immediately apparent that Simon is a pathetic figure. He’s bullied by everyone, from the only other commuter on the train to the service staff at his grim, stifling office to his martinet of a boss (an always reliable Wallace Shawn), who refers to him as Stanley. Even in his home life, he’s dismissed by his elderly, ailing mother, who refuses to acknowledge that he’s clearly visible in a dreary-looking corporate commercial.

In short, Simon is a sad little non-entity of a man. One could see his life playing out drably—as he’s ignored at work and home and gradually ages into one of the crooked, elderly staff members that seem to be his only coworkers—but, instead, two things happen. First, while observing (an unkind person might say spying through a telescope on) his beautiful neighbor Hannah (Mia Wasikowska), he sees a man gently wave to him before jumping off a ledge to his death. Second, the titular double appears in the person of one James Simon (Eisenberg), a new employee who has the exact likeness of Simon and none of his personality. Where Simon is passive, James is dynamic. Where he makes up excuses to awkwardly talk to Hannah in the copy room where she works, James seduces with a glance. At first, Simon sees this as an opportunity to improve his lot in life, but he’s soon in way over his head as James manipulates him and impersonates him at every turn.

Although it’s based on an 1846 novella of the same name by Fyodor Dostoyevsky, The Double’s true parent is Terry Gilliam’s Brazil. Ayoade’s film (co-written by Avi Korine) doesn’t specifically ape any particular shot from Gilliam’s opus, but it unmistakably has the same oppressive, continually shadowed atmosphere, from the vaguely out of date office equipment to the central action being predicated on the similarity between two men’s names. It’s much to the director’s credit that it never feels like he’s copying one of the most visually distinctive filmmakers in history, but is instead creating his own world with the same palette.

If anything, Ayoade shows a remarkably distinct style on just his second film (after 2010’s Submarine). His camerawork is kinetic and rapid, while avoiding the staccato cuts of his countryman Edgar Wright; instead, Ayoade shoots at unusual angles, often framing a scene just slightly overhead or through reflections. In particular, cinematographer Erik Wilson keeps Simon in tight, blocked-in shots, like a masterful tracking shot which follows him as he walks towards the camera down a narrow hallway. Combined with the claustrophobia of his workplace and his apartment complex (which invokes all the peace and comfort of Rear Window filtered through a Soviet-era tenement), The Double locks in a suffocating atmosphere that never lifts.

But all of this would only work if Eisenberg can pull off the dual roles of Simon and James convincingly. Fortunately, he puts in some of his best work to date; while the two may be physically identical, Eisenberg manages to instantly indicate which he is playing simply through body language and more importantly, speech patterns. While Simon mutters and allows himself to be spoken over, James is constantly confident and able to rattle off threats or promises with equal ease. In fact, the rapid-fire dialogue is one of the film’s greatest strengths; every character’s speech seems mechanical and rote until it bursts out into unexpected rage or sadness. There’s a certain familiarity to any kind of bureaucratic doublespeak, and The Double absolutely nails the pitch-black humor and depression of it.

As it nears climax, The Double grows increasingly surreal. While Ayoade makes use of shots of monologues and close-ups that have to be motions towards a heightened reality (frequently with idealized, brightly lit shots of Wasikowska) from the beginning, the movie becomes frantic near the end. It’s much to its credit that the eventual ambiguity of Simon and James’ doubled nature does not feel like a cop out but more like an unresolvable existential crisis. But even if he had decided to finish it with a clear cut answer (and thankfully he does not), Ayoade’s new film would still be a masterpiece.