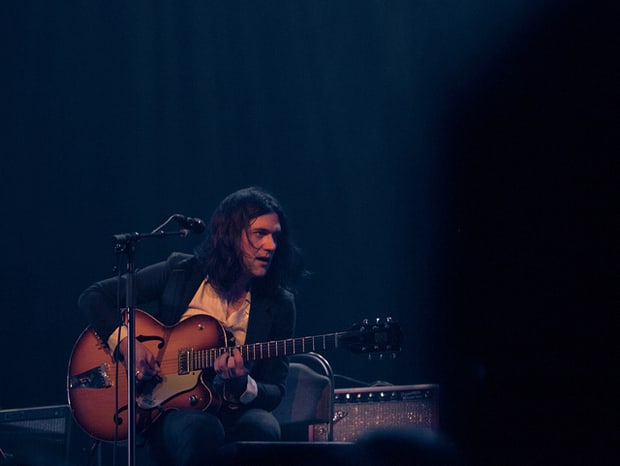 With a new band, a new record in the can and new tracks leaning toward an old sound, the expectations for the opening night of Conor Oberst’s solo tour leaned toward the unknown. With Upside Down Mountain still a week and a half from release, and Oberst recently telling Rolling Stone “I don’t relate to a lot of my earlier songs,” it seemed Oberst would be getting to know a slew of new songs at the same time as his audience. Still, the buzz inside the sold-out, impeccable three-level Haw River Ballroom, located in an old mill village just outside of Chapel Hill, remained one of anticipation. Would the oft-ornery Oberst come out and play the new record front to back? What from his back catalog, if anything, would flesh out his setlist? Oberst’s response came in the form of a two-hour show that surprisingly, and rewardingly, unfolded more as a career retrospective than an unveiling.

The dichotomy of familiar versus unfamiliar was in many ways the signature theme of the night. As always, Oberst stood front and center, appearing diminutive when behind an acoustic guitar (though he unexpectedly spent half the evening playing an electric) and child-like with a near Beatles-bob coif. His feet skated, his heels clicked, his right hand strummed aggressively as his trembling voice frequently swelled to a tantrum-like yowl, spraying saliva mist over his microphone. But standing behind him wasn’t Mike Mogis or the Mystic Valley Band. It was the always-smooth Dawes, who reworked Oberst’s old favorites and even new material with a polished stamp. Dawes had already delivered a stealth well-received set of their own that likely earned them a host of new fans (these guys would be absolute superstars making radio gold were this the 1970s) before pulling double duty, dancing over the top of Oberst’s songs with licks and leads like the Cardinals behind Ryan Adams. Though at times their glaze was a little too bright in comparison to the freewheelin’ Mystic Valley Band, they played the material as if they’ve always been playing it, especially nailing the Wilco-esque Outer South gem, “I Got the Reason.”

It also didn’t take long to realize Oberst and Dawes were pulling from a well far deeper than Upside Down. Oberst seemed at ease, upbeat and gracious being back on tour, a topic that came across in some very familiar tracks just three songs into the night. “I haven’t been gone very long/ But it feels like a lifetime, Oberst sang during the Bright Eyes favorite “We Are Nowhere And It’s Now,” just after revealing “There’s nothing that the road can not heal” from “Moab,” off his self-titled release. Oberst would go on to play nearly half of that 2008 release, but the best reactions unsurprisingly came for the large handful of chestnuts Oberst delivered off Bright Eyes’ 2005 I’m Wide Awake, It’s Morning, especially “Poison Oak” and a sleepy, countrified version of “Old Soul Singer (For the New World Order).”

While the night belonged to Oberst’s past, his present wasn’t entirely ignored. Describing the audience as sympathetic, Oberst wisely realized that the majority of the crowd wasn’t yet familiar with his new material, so he stuck to some of the more accessible tracks from the forthcoming Upside Down. The driving four-chord folk-rock of “Zigzagging Toward the Night” fit right into the set, while the dissonant and waltz-y “Double Life,” with its multi-part harmonies, was right in Dawes’ wheelhouse. But with the absence of pedal steel, much of the Nashville sound of the record was stripped away live, and over time energy wavered until the next “Sausalito,” “Get-Well-Cards” or “Danny Callahan.” Still, the crowd hung with these debuts and really felt the Carolina reference and Talking Heads’ groove from the encore “Hundreds of Ways,” which on night one already started generating as much life as any song from the show.

The idea of a Conor Oberst solo record is in many ways silly propaganda. Oberst is a songwriting force like few from our generation, and whether it’s with Bright Eyes, Desaparecidos or the Mystic Valley Band, there isn’t a question as to who calls the shots. But in many ways, the true testament of a song is how it can be bent and folded, shared and calibrated. To hear Oberst rework his own catalog all while unveiling new, poignant music makes for a fairly unique concert experience at a time when, thanks to the Internet, the element of surprise is largely gone from live music. It might have just been because it was opening night that the audience spent most of the night on their toes, but with Oberst, you really never know where the night will take you.