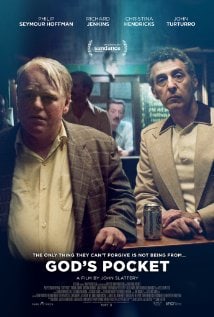 [xrr rating=3.0/5]Local celebrity reporter Richard Shellburn (Richard Jenkins) provides the opening voiceover in God’s Pocket, narrating the lives of people he only thinks he understands. He’s droll and pompous and so commercial you expect him to declare of this working-class neighborhood, “With a name like God’s Pocket, it has to be good.” He’s a wannabe James Agee without the talent, a faux populist and self-appointed Modernist who can’t even get the drinking and the whoring part of the stereotype right. Shellburn fetishizes the residents of this South Philly community, oblivious to the fact that the insular quality he tries so hard to decode is their instinctive reaction to the kind of objectification he cashes his weekly paychecks on.

Life in God’s Pocket in the 1970s is a desultory affair. A sickly yellow-brown haze floats over the town, rotting the wallpaper and dulling emotions. It’s a neighborhood so economically depressed even the funeral home has trouble making ends meet. Cue the death of local scumbag Leon Hubbard (Caleb Landry Jones), a young man whose fatal conk to the head may have been deserved, and may not have been an accident. His beautiful mother Jeanie (Christina Hendricks) is sure there’s more to his death than she’s being told, and in short order she convinces the police, the mob and the media to investigate his death.

Jeanie’s husband Mickey (Philip Seymour Hoffman) had little time for his stepson when he was alive, and even less now that he’s dead, but he hopes to pick up a little money working a heist with his buddy Arthur (John Turturro); a nice funeral for Leon will make his wife happy. Everyone wants to make Jeanie happy, though why is unclear. She walks through God’s Pocket like a displaced Ophelia searching for something to drown herself over, though Hendricks plays her as nothing but a dull-eyed bimbo who commands attention solely because of the size of her breasts, lifted to such ridiculous heights that they’re practically brushing against her cheekbones.

Mickey’s good intentions, whatever their motivation, lead to a series of catastrophes that he can only endure, never control. This sad sack’s fate is meant to be humorous, but as hard as the film tries, it just can’t see what’s funny about a really satisfying death, or the greedy sumbitch (Eddie Marsan) who runs the funeral parlor. A creeping funk takes over, an absolute disaster for a film that, at heart, has no real conflict to resolve. By the time the big gag rolls around, it’s hardly recognizable as a gag at all.

With all humor drained from the film, it turns too quickly into a condemnation of working class folks, who are portrayed as novelties by the very film meant to skewer class bias. Granted, humor so dark it could be mistaken for an oil spill or localized black hole can be a difficult sell, but shouldn’t be with actors like Hoffman and Turturro at the helm. They both understand the humor and the humanity of their roles, and the almost mythological absurdity of their small-time meat-stealing racket, but their fine performances are just not enough to rescue God’s Pocket from itself.