January 27, 2021
Home Music The Pains of Being Pure at Heart: Days of Abandon 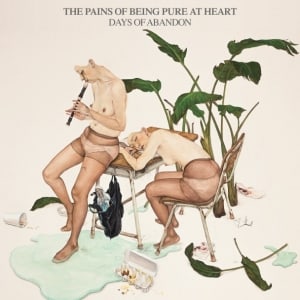 [xrr rating=3.25/5]It seems the Pains of Being Pure at Heart grew dissatisfied with being the Pains of Being Pure at Heart almost immediately. Their 2009 self-titled LP was about as perfectly formed as debut albums get, instantly mastering a certain tone of fuzzy twee mixed with bright, jangly guitars. It was as though the band had emerged fully formed to answer the question of what Belle & Sebastian would sound like if they were the Jesus and Mary Chain. But rather than directly pursuing that direction, bandleader Kip Berman enlisted ‘90s mega-producer Flood for Belong; it was something of an unsatisfactory detour, as though JAMC and Stuart Murdoch had suddenly decided that the Smashing Pumpkins had the right idea all along.

Days of Abandon is, if not quite a realignment after a misstep, pretty close to it. The Pains’ sound is significantly drawn back from the heavy guitars of Belong, although they’ve always been louder than Berman’s breathy voice would suggest. It’s an album filled with simple but catchy hooks and the same teenage wistfulness that defined them as a band so early on, but if anything, feels refreshing in an indie rock world of grime and self-awareness. “Art Smock” opens the album in low key mode, with a simple acoustic guitar backed by hints of keyboards and Berman singing, “Wanna know what happened to you/ Liked you better in your art smock/ Mocking art rock without intention/ Without desire.” It’s a deceptively quiet beginning to the album, which quickly kicks into pop mode with “Simple and Sure.” After a delightful, wordless vocal hook, Kurt Feldman’s drums kick into a bright, punchy beat that characterizes the album almost as much as the guitar lines. By the following track “Kelly,” it’s clear that the Pains are taking their current inspiration from mid-period Cure albums; the guitar riff is noticeably similar to that of “Pictures of You” and Peggy Wang’s keyboards just confirm it.

This isn’t to say the Pains are wholly derivative, just that they show their influences on their sleeve. Songs like “Eurydice” and its painful, gorgeous chorus of “I’ll never stop losing you” or the subdued-until-it-explodes “Coral and Gold” show some real songwriting chops and even better arrangement. The closing “The Asp at My Chest” ends with a flourish of French horns and what distantly sounds like a balalaika, hopefully showing a new direction for the band to move in other than post-punk thrift-shopping. The band drags the most on the six minute plus “Beautiful You,” which frankly doesn’t have an interesting enough lyrics or a hook compelling enough to be a full two minutes longer than anything else on the album. Fortunately, the rest of Days of Abandon largely doesn’t fall into the trap of pushing a good thing too far is ambition.