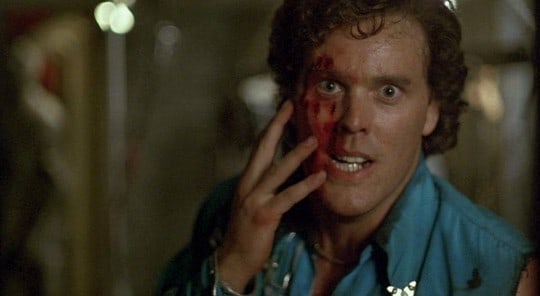 Vice Squad opened in New York City the same day as On Golden Pond. It was January 22, 1982. The high temperature in Manhattan was a frigid 18 degrees. There could hardly have been a more polarized choice for a mid-winter Friday night’s entertainment: a tearjerker about a pair of Hollywood legends in their golden years, or a seedy Los Angeles crime drama whose heroine performs golden showers.

Despite appearances, Vice Squad was a B-movie in prestige picture clothing, albeit the cinematic equivalent of a designer tube top. Its wet, neon-drenched LA streets were shot by master cinematographer John Alcott, who worked on a string of Stanley Kubrick classics (and won an Oscar for his natural-light work on Barry Lyndon). Vice Squad director Gary Sherman is no Kubrick, and Vice Squad doesn’t boast the careful art direction of A Clockwork Orange. But this sleazy exploitation is a low-rent version of the old ultra-violence, its observation of urban low-life like Taxi Driver stripped of art house trappings.

Reviews were mixed at the time. For every positive notice (Vincent Canby of The New York Times actually liked it), there were just as many who found the movie to have no redeeming value. For every critic who appreciated Alcott’s cinematography, there was another who found the production values on a par with his uncle’s home movies. I want to see those home movies! 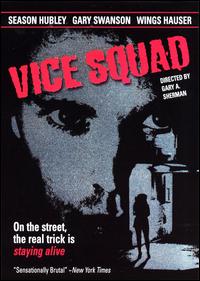 Alcott’s camera took a gritty look at Sunset Boulevard that starts with high heels. As the credits begin to a sleazy rock and roll drum beat, the camera does a once over from the shoes up on one of the Strip’s night walkers. B-movie geeks will recognize the mewling voice on the theme song: that‘s Wings Hauser singing “Neon Slime,” and it’s not his first musical endeavor. Hauser led the psychedelic folk band Vision of Sunshine and also released a solo album under the name Wings Livinryte. One of his four guest appearances on “Murder, She Wrote” even featured a fictional album cover for his character of a murderous gardener. Hauser’s vulgar rock star strut sets the menacing, over-the-top tone for Vice Squad, much as his effectively menacing villain Ramrod sets the tone of the Strip.

The first prostitute we meet is Princess (Season Hubley), whose conservative ‘80s hairstyle and wardrobe seems modeled after Princess Diana. As Princess plays on girls’ fairy tales (and perhaps anticipates the sordid end of her inspiration), Ramrod subverts American pop myth: a cowboy-hat wearing pimp who keeps framed pictures of Elvis in his lair.

If this sounds like exploitation, it is. But it’s vividly drawn exploitation that revels in cinematic sleaze. I hated Vice Squad when I first saw it on HBO in the early ’80s. I was a teenager. drawn to sleazy cable movies, and if its program notes included the warning “strong sexual content,” all the better. While this usually meant rowdy coming of age movies or art house sexploitation, with Vice Squad the warning was cautionary, its vision of sex not about pleasure at all but about violence and degradation.

In a verbally graphic scene, vice squad officer Walsh (Gary Swanson) fills in a cornrowed officer on the varieties of sexual experience they were likely to hear about on their sordid new beat. The movie’s most sexually graphic scenes were its most violent, as Ramrod wielded fists and coat-hangers in his sadistic display of power. It was completely unsettling to a teenager, and the movie put me off Wings Hauser for years. Only recently have I come to appreciate Hauser’s effectiveness as a villain—and, as I explained in a previous Underrated column on Tough Guys Don’t Dance, as an unrepentant ham.

Alcott’s cinematography makes Vice Squad watchable; Hauser’s Ramrod makes it enjoyable. He’s the Michael Myers of pimps, a seemingly unstoppable monster drawn from real life. As a title card claims before the credits roll, Vice Squad, “Though a work of fiction… is a composite of events that have actually taken place on the streets of Hollywood.” Another American myth to which the movie lays waste.