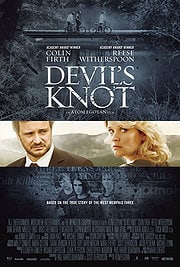 [xrr rating=1.5/5]Atom Egoyan’s latest film, Devil’s Knot, is a docudrama based on the murder of three eight-year-old boys in the sleepy Bible Belt town of West Memphis, Arkansas. The case and its outcome have been (very) well-documented over the course of four documentaries—Joe Berlinger and Bruce Sinofsky’s Paradise Lost trilogy and Amy Berg’s 2012 West of Memphis—each of which are exhaustive in both their research of the crime and the botched investigation and subsequent sentencing of suspects Damien Echols, Jason Baldwin and Jessie Misskelley, otherwise known as the West Memphis Three. Egoyan, seemingly uninterested in offering a novel perspective, simply dramatizes the scenarios and information chronicled in the preceding docs, resulting in a watered-down and occasionally exploitative take on one of the country’s most enthralling true crime stories.

In his best films, Egoyan is highly attuned to the inner lives of his characters, and even in a minor work like this, there’s a sense that he understands these people—at least to the degree that they are compelled to create narratives not only for themselves (Jessie Misskelley’s false confession is central to the film) but for those around them. As the first Paradise Lost film sufficiently illustrates, West Memphis police built their case on the controversial lifestyle of the suspects, particularly that of Echols, who was painted as the ringleader of the group and an evil, devil-worshipping sociopath during the trial. An interest in Satanism, Wicca, death metal and generally creepy shit notwithstanding, the evidence against Echols and the rest of the West Memphis Three was nothing more than circumstantial, but that didn’t stop each from receiving major life sentences. Egoyan makes clear how collective bias and media influence can create self-sustaining fictions that cloud dire, real-life circumstances.

That said, Egoyan may understand the people involved, but that doesn’t mean he understands the story—not on any meaningful level, anyway. Working from a script based on Mara Leveritt’s similarly redundant 2002 book of the same name, Egoyan seems to model Devil’s Knot on David Fincher’s Zodiac, specifically in the way he follows Ron Lax (Colin Firth), a private investigator who catches wind of the situation in West Memphis and resolves to clear the suspects’ names. Lax quickly becomes obsessed and puts his reputation on the line, and Egoyan analogizes Lax’s personal struggles with his fixation on the case in the same way Fincher did Robert Graysmith and co., but Egoyan, along with screenwriters Paul Harris Boardman and Scott Derrickson, doesn’t come anywhere close to the thematic depths of Fincher’s exhaustive survey of obsessive personalities, inscrutable realities, the structure of American police work, the allure of violence and the symbiotic nature between each of them.

The other major figure in Devil’s Knot is Pam Hobbs (Reese Witherspoon), the mother of one of the murdered boys who slips into a deep depression upon learning of her son’s fate. Some of the film’s most stirring scenes are told from her perspective, which is deliberately obscured to reflect just how far removed those most affected by the crimes became as the case grew more controversial. Her sense of loss is central to the human aspect of the West Memphis saga, but Egoyan isn’t interested in exploring her story as much as Lax’s.

Other central figures, including the infamous John Mark Byers (played here Kevin Durand) and even the West Memphis Three themselves, are given nothing more than cursory glances, which only muddle the narrative and its aims. As the story unfolds, the film becomes increasingly generic, suggesting Egoyan struggled with wrangling the wealth of information and evidence into a reasonable runtime. There’s a reason it’s taken four films to tell this story; Egoyan’s attempt to squeeze the whole thing into one feature plays like the CliffsNotes version of nearly two decades’ worth of quality documentary filmmaking.