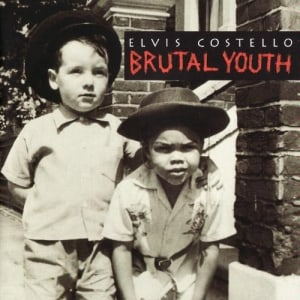 Is older really wiser? By 1994, the angry, bitter young man of My Aim Is True, Next Year’s Model and Armed Forces had long vented most of his vitriol. The year before, Elvis Costello had dabbled in chamber music on The Juliet Letters, which suited his eclectic nature, but, like many other fans, I still hoped that 1994’s Brutal Youth would break a string of less interesting releases. “13 Steps Lead Down” and “20% Amnesia” provided some joy, but I was still disappointed. It would have been foolish to expect him to retrace old ground, but it seemed more like he was slowing down and getting too old to summon the angry energy of those early albums. While I never purged it from my collection, I haven’t really listened to it in the 20 years since then. But coming back and giving it a fresh listen, I’m struck by how strong an album it is. Some of that perspective comes with my own growth, but it’s clear now that Costello was well on his way to developing an adult voice that blended his acid words and attitude with his strong ear for pop harmony and taut arrangements. He had already outgrown most of the behavioral excesses of his youth and this album shows him internalizing musical lessons from pop masters like Burt Bacharach, the Beatles and Harry Nilsson. If he’s now recognized as a masterful writer and sought-after collaborator, this album plays a strong role in building that reputation.

Take “You Tripped at Every Step,” which initially comes across as a bit too mannered with its single-line chorus and simple harmonies. Costello gently croons over the polished pop surface, straining his vocal range at the edges, but the tune is perfectly balanced. Steve Nieve leads into the song with a striking piano intro, but then drops back to let Bruce Thomas’ bass take control. Nieve then alternates between tasteful organ fills and light piano accompaniment. His touch is delicate, letting the bass and drums provide most of the support for Costello’s vocal. For such a sparse arrangement, the track is remarkably full, largely due to the rich harmonic progression, especially the soaring, Beatlesque bridge. With each perfectly timed hand-off, it’s a treat to hear the Attractions together again, even if they’re playing pop rather than new wave.

But my stronger appreciation is not just due to my own maturity; pop music itself has grown up and caught up to Costello’s sensibility. While there are still plenty of teen idols making dismissible pop fluff, there’s been a renaissance of sharply focused pop writers since then, from Adam Schlesinger (Fountains of Wayne) and Jill Sobule to Mel Krahmer (Sirsy) and Mark Mulcahy. Costello’s flair on Brutal Youth didn’t likely inspire this aesthetic, but that context does make it easier to appreciate what he and producer Mitchell Froom accomplished. Each tune on the album receives a similar treatment. They present a placid pop veneer for accessibility, but the surface masks a musicality inspired by the kind of smart writing that Bacharach and Hal David effortlessly encoded in their seminal work of the 1970s. Where Costello had earlier copied his idols to create pastiches like “Baby Plays Around” (Spike, 1989), now his understanding is more intuitive and original. He matches his icons’ craftsmanship to his own trademark style – breathless delivery, dense word work and a strong appreciation for his own cleverness and oblique references – and the combination connects to the desperation and audacity of his first three albums while still showing his development as a writer. That’s the beauty of this album: sneers and snarls may be his stock in trade, but the song arrangements show that he’s sweated over the delicate shading of the background figures, as much in service to his own sense of musical perfection as for our benefit.

Those first impression songs – the thrashy “13 Steps Lead Down” and the theatrical “20% Amnesia,” along with the restrained contempt of “Sulky Girl” – are still favorites, if only for reasons of continuity, but they reveal the same artistic strength. Some of their appeal is certainly tied to hearing the Attractions back in classic form, as well as appreciating lines that allude to a more intriguing backstory like, “When nobody knows/ She puts on secret clothes / And lies in the meadow with her hands tied behind her back.” But Costello’s compositions are compelling and, lacking the sonic clichés of blues or classic rock, listeners are pulled in to the songs by novelty to be satisfied by the depth.