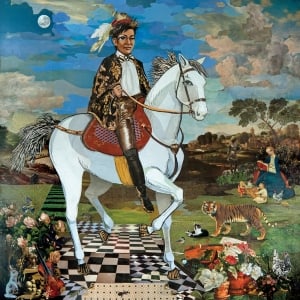 [xrr rating=3.5/5]Jupiter One founder and Of Montreal collaborator K Ishibashi is one of those rare “triple threats” in today’s music industry. As a virtuosic violinist, soulful vocalist and empathetic songwriter, he brings a richness and vitality to his art. This isn’t even to mention his innovative use of looping technology. Ishibashi can be compared with artists such as Andrew Bird and tUnE-yArDs who are using the loop pedal as an instrument in and of itself, a compositional device to create dense layers of sound.

While a technological gimmick, so to speak, is at the heart of Ishibashi’s music, his 2012 debut under the stage moniker Kishi Bashi felt far from contrived or coldly calculated. 151A was full of songs of hope and loss, with layers of humanitarian violins supplementing Bashi’s warm voice. The tunes “Manchester” and “Bright Whites” in particular were perfect indie-pop songs, numbers wherein every element (melody, rhythm, lyrics, instrumental arrangement, etc.) coalesced to express sublime joy. With lines like, “I found you, now the story has its proper ending” and “If you’re to smile at me/ I could cry by land or sea,” coupled with jaunty grooves and playful layers of orchestral sings, it was difficult not to get caught up in 151A’s John Keats-like romanticism.

On the surface, the sophomore effort under the Kishi Bashi name draws from a comparable bag of tricks. The 11 tracks that comprise Lighght are similarly buoyant and intricate as those on 151A. If anything, these tunes are even more complex, with denser layers and more complicated polyrhythms backing up Bashi’s expressive voice. The artist seems more insistent this time around on revealing his own process to us. Whereas on his debut LP, the songs felt so organic that it was theoretically possible for the listener to remain unaware of the looping process central to its creation, there’s no mistaking the technique on Lighght. The record begins with “Début-Improvisation,” a few seconds of a traditional violin melody followed by looped permutations, including unnaturally high-pitched variations. These slightly creepy-sounding violin screeches also form the sonic basis of second track “Philosophize In It! Chemicalize With It!” While the result is technically impressive, it lacks some of the human warmth that permeated 151A.

Lighght also finds Bashi influenced by the likes of Passion Pit and Phoenix to create dance-oriented, clubby tracks. “The Ballad of Mr. Steak” in particular has a catchy enough synth riff at its center, but the four-to-the-floor disco groove seems oddly mismatched with the violin choir in the background. The lyrics, which revolve around an apparent “meat” metaphor to describe a failed relationship, also feel just a bit forced. “Carry on Phenomenon” manages to capture some of the 151A magic, though, with an attractive blend of odd time signature, expressive falsetto vocals and lyrical optimism (“So you’ve got the best of me/ So amazingly/ Carry on, carry on phenomenon.”

Bashi’s flights of fancy get carried away just a bit too much on the cosmic creation myth “Bittersweet Genesis for Him AND Her,” with lines like, “In the beginning we were scrambled together/ Mixed in a celestial bowl and hand fluffed with a feather/ And the tears of bliss were not amiss/ It was a good day.” In contrast, the guitar-driven folk-pop love song “Q&A” is about as straightforward as a Kishi Bashi song gets, a reminder that there are some serious songwriting chops behind all of the looped layers that dominate much of the record.

Lighght may be an inconsistent record, but it is never boring. It’s hard to fault Kishi Bashi for pushing his art too far or dreaming too big. Parts of the artist’s sophomore LP might feel a bit overdone, but he is to be commended for expressing strong artistic ambitions and larger-than-life human passions. Kishi Bashi’s magical mysteries will stick with the listener long after Lighght stops spinning.