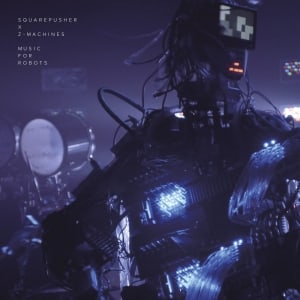 [xrr rating=2/5]A master of jazz fusion–laced IDM, Tom Jenkinson has pushed boundaries under the pseudonym Squarepusher for 20 years. Warp Records label mates may go ambient (Boards of Canada) or glitchy (Aphex Twin), but Squarepusher has made a career out of grounding even the most experimental electronic flourishes in melody. This was apparent even on the middling 2012 release Ufabulum, which Jenkinson approached as a rediscovery of electronic melody after getting burned out on guitars. To promote that album, he toured with an LED-equipped robot helmet. How do you top that? Real robots, of course.

Music for Robots takes Squarepusher’s electronic experimentation to a logical extension. For this EP, Jenkinson was approached by Japanese roboticists and collaborated with Japanese composers to create works for three “Z-Machines.” This isn’t to say that this is software-generated music. Robots played physical instruments to make Music for Robots. Warp Records promotes the EP on the idea that “a guitarist with 78 fingers and a drummer with 22 arms” can go places where no human musician can go. In theory, this is ingenious. In practice, it’s almost unlistenable.

This project raises the question of whether robots can play music with feeling. Unfortunately, the answer is a resounding “no.” Those 78 fingers can certainly produce lightning quick guitar arpeggios, but this five-track, 23-minute EP never settles into any meaningful musical moments, instead noodling around to the point of cacophony.

“Remote Amber” kicks things off with aimless rat-a-tatting mixed with piano plunking and discordant flurries of high-frequency guitar. The randomness of this opening sequence—which sounds like the mechanical band is warming up—seems pointless when you consider how much deliberate effort it took to make the robots play it. The rapid-fire “Dissolver” sounds like an apoplectic arcade game. “Sad Robot Goes Funny,” the track that started the whole project, has some welcome melody, and a lushness of sound achieved by a proficiency that is anatomically impossible for a human guitar player. But it also sounds like there are too many cooks in the kitchen, especially as the track goes into “improvisational” (again, a silly concept given the intricate programming) jazz diversions by its end.

Music for Robots has received more press than your run-of-the-mill electronic EP, and was even covered by CNN for its technological achievements. But musically, this EP never transcends the status of a novelty act. I’m sure seeing the Z-Machines perform live (they’re visually striking creations, complete with lasers and electrical wire dreads) would be worthwhile, but there’s nothing memorable or innovative here. Music for Robots simply does not compute.