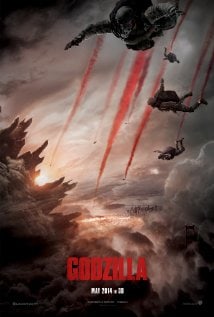 [xrr rating=3.25/5]Roland Emmerich’s dreadful version of Godzilla (1998) cured me of a horrible cinematic affliction. I was 21 when it debuted, on a solo trip to Hobart with loads of time to kill. Until that day, I made a point to see every major Hollywood summer blockbuster, the hope of great special effects and escapist fun a lure. After witnessing the awfulness of Emmerich’s film, I vowed to be choosier with what I watched, which has made me increasingly thankful with each Michael Bay film that comes and goes each year.

Like the majority of those old enough to remember Matthew Broderick and Jean Reno fleeing from giant reptiles in blind terror, I wasn’t particularly optimistic when it was announced that Godzilla would return this year. There are certain characters that simply cannot float off into the great celluloid closet in the sky. Freddy Krueger, Jason Voorhees, Leatherface and now, on the eve of his 60th birthday, Godzilla emerges from the seas yet again. Fortunately, this new version is miles better than the last time a Hollywood director tried his hand at bringing the Japanese monster to life.

Maybe Godzilla as a metaphor feels more apt now than 1998. As pieces of Antarctica break off into the sea and the Fukushima meltdown brought to life some of the anxieties that flared up in the original Godzilla feature, this new version could have been a heavy-handed allegory for climate change and human irresponsibility. In some ways, director Gareth Edwards, responsible for the low-budget horror film Monsters, uses Fukushima and the Japanese earthquake and tsunami as an inspiration, but Godzilla instead feels more akin to the majestic wonder of a Spielberg monster movie than a cautionary tale.

Like he did in Monsters, Edwards takes his time in revealing his creatures in Godzilla. There is some tremendous build up before we even catch a glimpse of anything non-human and when we do, Edwards only lets us see a piece at a time, aware that his behemoths are best revealed slowly, a tribute to their massive size. In between these reveals, Edwards stages some pretty exciting sequences, putting his human characters in perilous situations ranging from a collapsing nuclear power plant to a deserted railroad trestle to a threatened Golden Gate Bridge loaded with buses of evacuating children. As in Monsters, we often see these creatures as the characters in the film see them, on television sets and via windows rather than a full-on view.

However, those long, monster-less sequences would have been better if writers Max Borenstein and David Callaham invested more time in their human characters. Great actors such as Juliette Binoche, Elizabeth Olsen and Ken Watanabe are absolutely wasted, given little to do except gawp in wonder at the main attraction here. Bryan Cranston, a hot property ever since “Breaking Bad,” has a role with more meat as Joe Brody, a nuclear physicist who forewarns everyone that something horrible is coming. Of course, no one believes poor Joe until it’s too late. Cranston is such an effective actor, it’s a shame that he isn’t in the film more.

At its core, Godzilla is a throwback to classic monster movies as Edwards ramps up the destruction in the film’s final section. But take away all the human characters and dialogue and you would have the same exact film. Edwards plays it safe, making a risk-free monster movie that doesn’t ask us to think about or feel much other than the rippling thunder when giant monsters clash. But on a hot summer night, that isn’t necessarily a bad thing when handled so well.