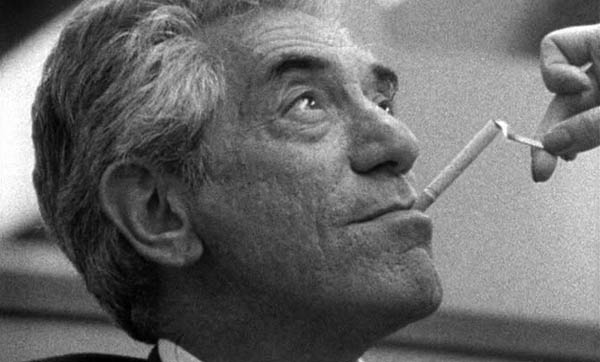 After his independent breakthrough Shadows, director John Cassavetes made a pair of films in Hollywood, and it was a terrible struggle. He told an interviewer that, “making A Child is Waiting was like drowning painlessly.” Cassavetes made Faces completely on his own terms, and it was a different kind of terrible struggle. Film scholar Ray Carney accurately describes the movie as “something unprecedented—a feature-length home movie paid for out of [the director’s] own pocket.” Faces is a challenging, frustrating film, but its financial and critical success set the stage for independent filmmakers to come.

The film sounds like simple domestic drama. Finance man Richard Forst (John Marley) wants to divorce his wife Maria (Lynn Carlin). He drinks with buddies and call girls (including Cassavetes’s wife, Gena Rowlands), she parties with girlfriends who pick up a beach bum (Seymour Cassel). In summary, this could be the stuff of melodrama. But it unspools in a thoroughly unsettling, alienating manner that goes against the cinematic grain. There are elements of the French New Wave here, but even for the art house this was unusually free, like a domestic drama by Ingmar Bergman gone out of control.

Cassavetes said that, “We make fools of ourselves constantly. In life this is frowned upon, but in a movie this is revealing.” This can also be chaotic. The film’s early scenes can be grating and difficult, the wandering handheld camera suggesting the point of view of a child or pet watching adults get drunk and making fools of themselves, singing and carousing so much that, if this were a real party, you’d get up and leave. The emphasis in this section is on a group of men, but the dynamic zeroes in on Forst and call girl Jeannie Rapp (Rowlands), who is a considerable dramatic and aesthetic foil. These scenes, shot in the homes of friends and family, are indifferently lit, with one major exception. This was the first time Rowlands, who at the time was getting more work as an actor than her husband, had worked on one of her husband’s films. Cassavetes was more concerned about cinematic honesty than about visual style, but it’s obvious how much the camera favors Rowlands, bathed in flattering light that makes her skin and hair look luminous while the grotesque men around her are photographed unforgivingly, the better to see their wrinkles and pockmarks.

This loose approach finally comes into focus in the film’s second half, and it’s not a coincidence that the handheld camerawork settles down considerably. Seymour Cassel and Lynn Carlin (who, like much of the cast, was not a professional actor) were both nominated for Oscars for their performances in Faces, and it’s in this section that they shine their dark magic on Cassavetes’s vision of American domestic life. But one of the film’s most remarkable performances comes from Dorothy Gulliver as Florence, a middle-aged woman taken with Cassel’s young stud. Gulliver made her name in silent films, but when Cassavetes tapped her for this role she had been away from feature films for over twenty years. Her powerful monologue grounds the film emotionally much as an uncharacteristically static camera grounds it visually. The film finally settles down, and it’s heartbreaking. 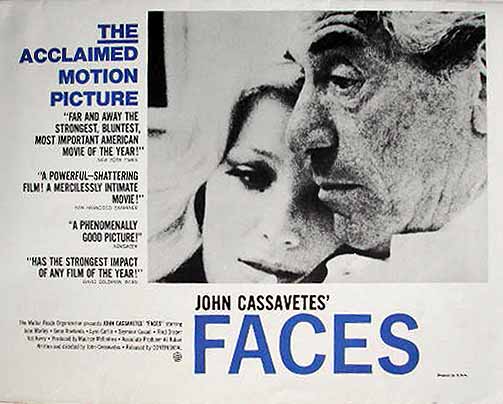 The conventional wisdom is that Cassavetes films are largely improvised, and it’s true that the director would go into his pictures not sure how they would end. But Cassavetes wrote scripts—his screenplay for Faces was nominated for an Oscar—and instructed actors to improvise their readings. The director put great trust in his actors and didn’t want to tell them how to feel, “directing” only in the sense that he’d steer actors away from what he thought was a bad line reading or scene.

After shooting was completed, Cassavetes spent nearly three years in post-production, editing mountains of 16mm film in a converted carport, at one point losing a stack of footage when his mother-in-law’s poodle defecated on it. The first cut of Faces was eight hours long. The running time went down several more times before reaching the released 130 minute cut.

Most of the music in Faces is provided by the cast singing old parlor songs. In the 19th century, music in the home was performed by consumers from published sheet music, and one song that Faces’ characters keep coming back to, Stephen Foster’s “Jeanie with the Light Brown Hair”, hails from this era of homespun music. Imagine an America where families gathered around the piano singing in harmony. Compare that with Cassavetes’s actors drunkenly singing and shouting at, and over, each other.

Jazz composer Charles Mingus, who provided the music for Shadows, liked to teach musicians new pieces orally, so they’d give the music their own interpretation. Cassavetes worked from a script but let his actors decide how to interpret it. This is jazz filmmaking, a dangerously collaborative approach to an art form that costs a lot of money and is usually kept under complete control. His approach was a recipe for mistakes, and Faces doesn’t all work—what feature length home movie could? But what this freewheeling atmosphere did was make it safe for his actors to reveal themselves and tap places and be themselves.