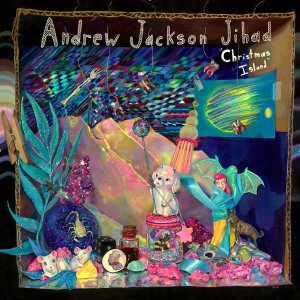 [xrr rating=4.25/5]Pipe bombs, Nazis and Linda Ronstadt. Yup, it’s got to be an Andrew Jackson Jihad album. What other band could sing “Stevie Wonder to the bullshit” with a cringe-inducing smile and make it sound natural? The Arizona-based barn burners have added more instruments and an ear for complex composition, but the black, bile-filled and nerdy heart that beats at the center of AJJ is still the same.

If you’ve kept up with the band over the years, you can see a clear trend: each album polishes the sound more than the last. The core of it all is AJJ’s insane folk-punk rants, but Christmas Island has the merry band of mad men adding on piano, strings and organ, much more than their previous guitar/bass/vocal foundation. This does take off some of the intensity they previously held. Songs like “People II: The Reckoning” were crushingly dark because of their simplicity. You were forced to listen to the desperation in Sean Bonnette’s voice when dusty guitar was the only other sound on the track. It might be a little bit easier to ignore Bonnette’s wild-eyed ramblings here, but not by much. The backgrounds are less bare and certainly more pleasant on a surface level, but it’s hard to drown out the “Open up your murder eyes and see the ugly world that spat you out” that opens the album.

Old AJJ fans will be pleased with songs like “Children of God,” “Kokopelli Face Tattoo” and “Getting Naked, Playing with Guns” that are similar to the old formula that dominated albums like 2011’s Knife Man. Lead single “Children of God” has Bonnette screaming about “the newly un-deceased” coming into a truly horrifying world over chiming piano. “Kokopelli Face Tattoo” has a slogan-worthy chorus in “Hey dude I hate everything you do/ But I’m trying really hard to not hate you/ Hating you won’t make you suck any less,” seconds after Bonnette says his “hate train started going ‘Choo-choo’.”

AJJ show a hell of an instrumental range on Christmas Island. “Deathlessness” is a scorching desert-rocker that would have worked well in the soundtrack to Red Dead Redemption (minus the swastika reference). “Best Friend” (spoiler alert the title character is dead) sounds like a homage to the Beatles “Here, There and Everywhere,” and “Do, Re, and Me” is actually—Jesus this feels weird to say—beautiful. The plucked violin line complemented by Bonnette’s best vocal on the album and staccato bass make it sound like a near chamber piece. The band that comes to mind while listening to this sonic evolution is Neutral Milk Hotel. AJJ covered “Two-Headed Boy” a few years ago and it’s clear that they aren’t afraid to experiment with odd combinations of instruments, even while the base melody is simple. That’s one of the grand things about Christmas Island, these chords ain’t hard, but AJJ do their damndest to make it enthralling and engaging.

As with most Andrew Jackson Jihad albums, whole days could be put aside to talk about the lyrics. It’s easily one of the most quotable albums made this year. You’ll catch yourself laughing at lines that really shouldn’t be funny. Maybe this is more of an indicator of where my mind is at, but when “Angel of Death” opened with “I am a blank page in a notebook waiting to be filled with countless drawings of…” I instantly thought “dicks” as Bonnette sang “cocks.” Eh, close enough.

AJJ can also do damage outside of fuzz rockers. In fact, some of the songs that are more hushed cut deeper. “Coffin Dance” keeps on creeping on as Bonnette sings “Shoot him again ‘cause I can see his soul dancing.”

Bonnette’s lyrics here are less direct than usual, but that makes it more morbid and infinitely less funny. “Getting Naked, Playing with Guns” seems to be AJJ’s spite-laden response to Arcade Fire’s The Suburbs. While Win Butler cried about the nobility of fighting the man in manicured lawns, AJJ readily admits that kids can be pretty fucking mean. They balance a sweet innocence with the constant need to be “burning shit.” Bonnette and an accomplice bully the new kid whose “Dad is dead enough that his new dad can kill the bends.” It’s impenetrably dark and Bonnette has obvious twinges of remorse as he sings about his crueler days.

Christmas Island, by itself, is one of 2014’s finest releases so far, but it will also serve as a great introduction for new AJJ fans. The work here is their catchiest and most streamlined yet, but it’s also some of their most caustic to date. It’s pure burning venom hidden in a surprisingly pretty package.