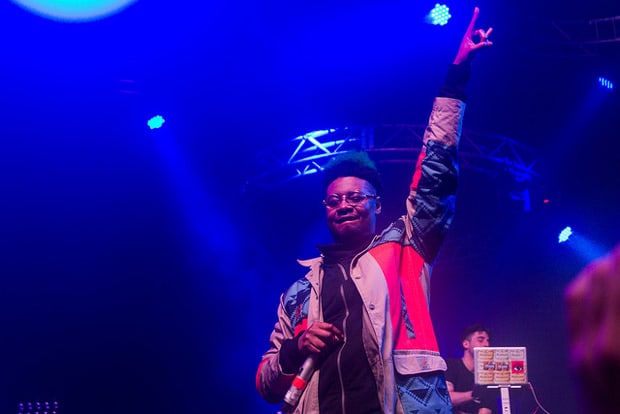 I sat in the balcony at the Roseland Theater, minding my own business and waiting for Danny Brown to come on at 10pm. As people slowly filled in the seats around me, the floor below was already swarming with young dudes, some shirtless, many in backwards ball caps. The last time I saw Danny Brown at the Roseland, a few years ago during Music Fest Northwest, a fight broke out.

“Come on, what are you?” the tattooed guy next to me insisted. “Thirty? Forty? Twenty?”

I finally told him.

“And you’re a Danny Brown fan? Right on!” He shook my hand, surprised that someone pushing 40 could be into the rapper. Meanwhile, one of the opening acts was rapping about pussy and two dudes starting fighting below us, the swell around the stage opening up as the grappled one another down to the floor.

“Do I look like I’m fucking ancient or something?” I asked the guy.

“Oh no, it’s not that,” he replied. “It’s just that you’re sitting there by yourself. You’re not drinking or smoking anything. So I figured you might be older or something.”

Then he introduced me to all his friends, including some big ass dude who got up from the row in front of us, walked around to me and shook my hand. Security had already escorted two combatants out below. I guess for a show where the main act raps a lot about “drinkin’ and smokin’” it’s expected that the audience comes fucked up.

Danny Brown isn’t above it himself. When I saw him deliver a blistering mid-afternoon set at Sasquatch last year, he appeared to be gloriously fucked up. Am I too old for that? None of my friends wanted to use my +1. Another asked me if I blew Danny Brown when I mentioned the show. Was I not welcome at the Danny Brown concert? Shit, my hair isn’t even gray yet.

Rap shows are tricky beasts. Much of the nuance that goes into a hip hop album is completely lost in a wash of drum sample and bass. Rapping can also come off as barking as the MC spits exhaustedly along, replicating the lyrics in a dutiful manner. For a form of art that originated in freestyling, watching failing to recreate a lush album track in the live venue is often painful.

Clad in a black leather jacket, tight black pants and black shoes, Brown didn’t seem nearly as fucked up as his audience. When he delivered that insane Sasquatch set, his great album Old had yet to drop. This time around, Brown seemed more content to let his hype men do all the heavy lifting.

Did I neglect to mention that Danny Brown now comes with hype men? Yes, for the first 10 minutes of his set, a gang of these guys buttered up the crowd before the man himself waltzed in from the side of the stage. Brown seemed downright subdued to these guys, but he doesn’t really need to make a name for himself anymore, does he?

It didn’t take much to get the audience going. “Break it (Go),” “Molly Ringwald” and “Smokin’ & Drinkin’” got folks moving. On the floor below, some of the kids even moshed to a rap show. The people in the balcony either danced and rapped along or stonedly stared as the rapper did his thing. And whenever it appeared the energy started to flag, Brown stood erect, threw a hand up in the air, stuck out his tongue and bobbed his hand. Then the whole fucking place would go nuts.

On Old, Brown divided the album up into two sections, the first composed of more mature tracks and the second full of his more far-out shit. I am definitely a fan of the latter and in those rare moments where Brown dared to let it all out, the concert soared. If you like that kind of shit, who gives a fuck how old you are? Just go and see Danny Brown already.