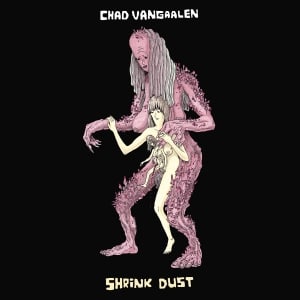 [xrr rating=3.25/5]It could be easy to let Shrink Dust wash over you. The folk instrumentation calls back to Neil Young’s Harvest or the Band’s albums. Chad Vangaalen’s warbling tenor and smart ear for ornamentation has his new album cocooned in warm sounds. If you’re perfectly happy with just having a pleasant listening experience, don’t look below the surface. Wade into the record’s nooks and crannies and you’ll find something truly terrifying. “Cut off both my hands and threw them in the sand/ Watched them swim away from me like a pair of bloody crabs” are the first words Vangaalen sings. There’s a dissonant duality similar to the works of artists like St. Vincent, but the juxtaposition of cheery folk and self-mutilation will creep into your subconscious. Vangaalen’s beautiful world is tainted with the poison of drug abuse, romantic failures and self-loathing.

Shrink Dust’s best weapon is its expert layering. VanGaalen isn’t flashy on guitar; he prefers a dusty and folky sound similar to fellow weirdo Father John Misty. Opening track “Cut Off My Hands” has a beautifully plucked guitar intro before Vangaalen starts his nightmare inducing verse. “Weighed Sin” has a crying slide guitar backing up Vangaalen’s mournful “I laid my head down on the track.” His stunning tenor makes these lines ring with even more sadness. He also shows a flair for composition; the golden vocal harmonies that dot the chorus of “Lila” punctuate a story of love that decayed into rotten hate.

Vangaalen isn’t stuck to the folky stuff. He’s got a psychedelic rock streak that rears its head occasionally on Shrink Dust. Lead single “Where Are You?” is driven along by rolling drums and a steady feedback haze that wraps itself around Vangaalen’s words. “Leaning on Bells” is a straight ‘60s acid rocker that has Vangaalen screaming “I will seek revenge for you!” over crunchy guitars. Both of these songs hint at an excellent future for Vangaalen if he dives into grittier sounds. Unfortunately, it’s a sound he doesn’t touch on nearly enough on this release. Vangaalen is slightly too reliant on traditional folk backgrounds. There’s not enough variation between these tracks; songs like “Frozen Paradise” feel redundant after a long string of The Freewheelin’ Bob Dylan-indebted pieces. “Cosmic Destroyer” doesn’t live up to its epic title, “Weird Love” feels unfocused and “All Will Combine,” despite a delightful keyboard lead that lights up the chorus, feels weighty and out of place.

That being said, Vangaalen can write a hell of a folk song. Album centerpiece “Hangman’s Son” is a twisted dustbowl ballad, similar to the works of Cass McCombs. A slide guitar returns as Vangaalen recounts the tale of the titular character who obsesses over death and loses everything he loves by the end of the song. It’s punctuated by a mournful harmonica and some of Vangaalen’s best lyrics. The title is warped into “He was the hanged man’s son/ He said ‘every day’s a curse and the curse just gets worse’.” Along with “Lila,” it’s the most potent potion Vangaalen concocts on Shrink Dust. There are a few cuts to be made here, but by and large Vangaalen stands as a grand storyteller, intoning tales meant to be told around camp fires late at night with a handful of hallucinogens in tow.