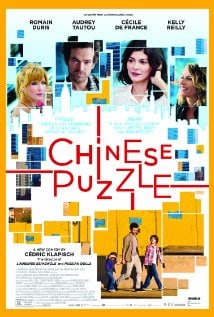 [xrr rating=2.75/5]Chinese Puzzle marks the long-awaited finale to Cédric Klapisch’s trilogy following the complicated life and relationships of writer Xavier Rousseau (Romain Duris). Whereas L’auberge espagnole was predominantly set in Barcelona and Russian Dolls ventured into London and Moscow, Chinese Puzzle broadens the trilogy’s horizons to include New York City. As always, the film centers on Xavier as he navigates relationships within his tight-knit group of friends, further complicated in this installment by the anxieties of turning 40. Maturing along with its characters, the trilogy wraps things up with a convoluted caper that concerns itself more with questions of adulthood and parental responsibility.

Klapisch benefits here from a prolonged absence from the series. L’auberge espagnole and Russian Dolls were separated only by three years. Chinese Puzzle sees Klapisch return to the characters eight years later to glimpse how the Apartment-set tackle family life and the reality of adulthood. Characters Martine (Audrey Tautou) and Isabelle (Cécile De France) happily receive much more screen time in this final installment and bring a better balance to the film with Xavier splitting his energies between Wendy (Kelly Reilly), Martine and Isabelle.

Picking up the story ten years after Russian Dolls, Chinese Puzzle opens with Xavier fast-approaching his tenth anniversary to Wendy with two kids to show for it. But years of marriage bliss and stability have taken a toll on Xavier’s writing career. As his editor says, happiness is boring compared with emotional turmoil. In an ironic twist of fate, Wendy opens up about her affair with an American and her decision to take the kids and move to New York. Suddenly, Xavier is forced to drop everything and build a new life in New York to have any chance of seeing his kids. Xavier crashes with Isabelle (who is pregnant thanks to Xavier’s sperm donation) and her Chinese-American girlfriend Ju (Sandrine Holt).

To its detriment, there are complicated and somewhat implausible subplots galore in Chinese Puzzle. Xavier takes a job as a bike courier to make ends meet and marries Nancy (Li Jun Li), the niece of a taxi driver whose life Xavier saved, to get a green card when his tourist visa runs out. Meanwhile, Isabelle has a brief, misguided affair with her babysitter (also named Isabelle). The situation becomes even more hectic for Xavier when his old girlfriend Martine visits New York with her own two kids. Once again surrounded by uncontrolled chaos, Xavier has one thing going for him: his new novel inspired by his muddled situation.

Towards the latter half of the film, Klapisch includes a brief but perceptive scene in a train station where Wendy, Martine and Isabelle teasingly tell Xavier that he really needs a woman who is the perfect blend of all three of them. While short and unassuming, that scene speaks to the fact that throughout this trilogy Xavier has been chasing an (ever-altering) ideal relationship: first, with Martine and then with Wendy. Much of Chinese Puzzle finally sees Xavier shift his focus from himself to his children. And that reflects Klapisch’s choice in Chinese Puzzle to give children to each of his main characters. Now in the background of their relationship woes, each of them has to temper their own desires with newfound parental responsibility.

And that is truly where the film ultimately falters. For once, the setup of Klapisch’s film wasn’t a straightforward search for Xavier’s new girlfriend but a globetrotting journey to keep what was left of his family intact. Klapisch backpedals on that by bringing back Martine not as an old friend but as a renewed love interest who decides to stay in New York with the newly married (however deceptively) Xavier in a conventional and clichéd romantic ending. Part of the appeal of the previous films was a certain degree of unsentimental realism in their portrayal of romance. Certainly, the pairing of Xavier and Martine will please fans of the trilogy, but the giddy ending can’t avoid coming across as forced. Despite the unmanageability of the ultimate situation, Chinese Puzzle does manage to provide a tidy ending for the trilogy and can easily stand alone as a harmless romantic comedy.