City Lights is proof that less is more. It is proof that a film doesn’t need a serpentine plot or blockbusting special effects to enthrall. It is proof that even as Charlie Chaplin’s masterpiece noses it way towards its 100th birthday, it still retains the power to elicit laughter, the power to draw out tears. It is a film bursting at the seams with pathos, comedy, Chaplin’s balletic stunts, sharp humor and sophistication. It is also the last gasp of a dying art form.

When City Lights premiered in 1931, the silent film was moribund. The Little Tramp, a staple of the silent film, would have to adapt to the demand of audiences expecting talking characters or else Chaplin would have to hang up his beloved character’s cane and hat. But the Tramp had always been the child of pantomime and a loquacious Tramp must have appeared counter-intuitive to his creator. Thus, City Lights (and Modern Times, made five years later) are defiantly iconoclastic in their silence.

It makes sense, especially since the Little Tramp is a man out of time in City Lights. He lives in a bustling city where most of the other characters are employed. He lives on the outskirts, ignored by most, laughed at by those who take the time to consider him. Even the most marginalized characters are either somewhat gainfully employed (a blind flower girl played by Virginia Cherrill) or incredibly rich (the drunken millionaire who befriends the Little Tramp during a botched suicide attempt). The only people who appreciate him are those who cannot see him: the blind girl and the rich man who only recognizes him when he’s drunk.

In many ways, there are two films occurring simultaneously in City Lights: a touching romance and an uproarious comedy filled with one hilarious set piece after another. Consider the boxing sequence where the Tramp tries to earn money to save the blind girl and her grandmother from eviction. The scene is deftly choreographed as the Tramp moves in step with the referee to shield himself from his stronger opponent. Some folks may consider silent films simple or even inferior, but try to recreate the boxing sequence with some of your friends and you will understand why not many can replicate Chaplin, Keaton and Lloyd without the help of CGI in modern film. 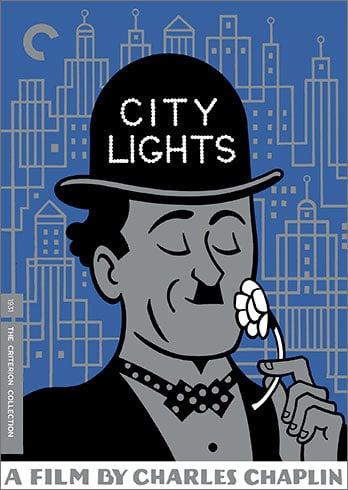 But for every comedic sequence, City Lights serves up another filled with rich poignancy. Of course, the great conundrum exists where the flower girl is convinced that the Tramp is a magnanimous millionaire who has arrived to rescue her from a life of squalor. So when they discover that a Viennese doctor can cure blindness, the Tramp is torn between restoring his love’s vision and having her discover the truth of his existence. They are both caught up in a pleasant dream, but eventually the Tramp does the right thing and helps her get her sight back.

All of this leads to one of the best closing sequences ever committed to film. The Tramp has just been let out of prison and looks more destitute than ever. His pants are ripped and he wanders the streets in utter despair. He comes across a florist and inside, sees the flower girl. She smiles at him and offers him a flower and a coin, unaware that he is, in fact, the one who made her sight possible again. He tries to shuffle away, but she goes after him and grabs his hand. That moment of touch makes her realize that this poor soul is her benefactor. “You?” the title card says. The Tramp nods, hides his face behind the flower and asks her if she can see. She affirms that she can and keeps smiling at him. For the first time, someone can see the Tramp and then the film fades away.

I showed City Lights to a group of high school students once. Their only exposure to silent film came the week before when we explored The General together. As the flower girl saw the Tramp and the screen went dark, I could hear my students stifling tears. My grandfather was 13 when City Lights premiered. It still holds its power so many generations later. I cannot wait until my son is old enough and we can laugh and cry together with Chaplin.