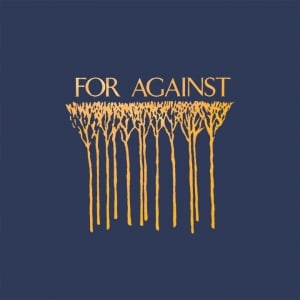 [xrr rating=4.0/5]They’ve made music on a regular basis since the ’80s, but Nebraska’s For Against has always been an overlooked and under-appreciated outfit. The Factory Records-inclined rockers’ early, exceptional records seemed destined to languish in obscurity due to bad luck and worse timing. For Against didn’t have the benefit of a taste-making label like 4AD, and it didn’t help that the band hailed from Lincoln instead of Manchester or Liverpool. Through many lineup changes, For Against has always revolved around vocalist and bassist Jeffrey Runnings, but the recordings that included Harry Dingman’s guitar-work and Greg Hill’s drumming remain the pinnacle of their career. After much-needed CD reissues in the mid-‘00s, Captured Tracks has re-released their 1987 debut Echelons, December and the 10″ In The Marshes together in LP form, making a concise case for the band’s cult following.

While December would improve on nearly every aspect of For Against’s debut, Echelons still holds its own, despite feeling like an attempt at something greater. Right away, For Against established a sound that plainly illustrates their post-punk influences, with Joy Division’s sinewy rhythms, Gang of Four’s charged bass lines and a guitar sound associated with Echo & the Bunnymen or the Church. This aesthetic didn’t make them popular. For Against favored the sound of early R.E.M. without the joviality, their consistently morose lyrical content combining with a dreamy sensibility that distanced them from the noisier indie-rock acts of the early ‘90s.

Echelon is tense, unnerved and agitated, focused on feelings of alienation and loneliness that are firmly rooted in the band’s Nebraskan locale. They direct their morose lyrics into coiled melodies and the precisely robotic clatter of Hill’s percussion and Runnings’ steely vocals. The opening track, “Shine,” surges forward with a propulsive energy, and the song’s muscular bass-line tethers those chiming guitars down as Hill’s drums jitter and ricochet about (an immediate example of those early records’ universally stellar production). “Autocrat” uses a more sharpened, antagonistic guitar style, strikes and noisy squall piercing the song’s unwavering melody (reminiscent of “A Forest”). The lengthy album closer, “Broke My Back,” nurtures a dramatic beauty, Dingman’s guitar figures coming off like a Television take on dream-pop.

December honed the Echelons sound with more confident songs, Dingman’s guitars acrobatic with their precise and furious cuts, and Runnings’ vocal delivery more impassioned than the resigned tone of their debut. This sophomore effort features even more graceful interaction between Dingman and Running, nimble precision enhancing potent melodies as guitar punctuates vocals with a responsive crackle. December introduces many of the atmospheric elements that would later earn For Against the “dream-pop” tag, which is easy to apply to some of the gloomy ‘80s demos on In the Marshes. From the brooding verse-refrain payoff of “Stranded in Greenland,” the impassioned performances on “Clandestine High Holy” or the way “The Last Laugh” gradually swells into a big sweeping breakdown, December is haunting and inspired throughout.

Echelons and December hail from a specific period of late ’80s college rock, and at the time, it was harder to distinguish For Against from their contemporaries. Nevertheless, a couple decades later these records have aged exceptionally well, and this boxed set demonstrates a clarity of vision that informed the six albums that followed. While For Against merited more attention when these early songs were new, it’s easier to recognize their skillful songwriting after the fact, knowing For Against would be just ahead of trends throughout their band’s career.