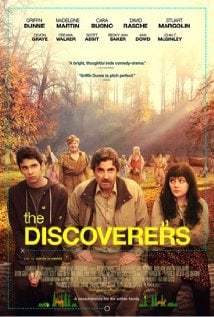 [xrr rating=3.5/5]Fall is such a beautiful season to have a breakdown. And right on cue, Lewis Birch (Griffin Dunne) is headed for one hell of a breakdown, thanks to his pending divorce, two full-time jobs and his father Stanley (Stuart Margolin), a man who suffers from the kind of crazy you can really sink your teeth into. Lewis, with his teenaged kids Zoe (Madeleine Martin) and Jack (Devon Graye) in tow, heads to an important conference to shop his life’s work: a historical biography on York, slave to Lewis and Clark on their famous expedition. There’s a detour, though, when he learns his estranged father has told his brother that their mother is sick and needs help. When Lewis arrives at the family home, he discovers his mother is not ill: she’s dead, and still lying on the bathroom floor.

One uncomfortable funeral later, Stanley has become catatonic. Before Lewis can make plans to find a caregiver, Stanley has taken his gun and run off to the annual Lewis and Clark Discovery Trek Expedition. Thanks to a doctor who dispenses sketchy medical advice just to get the plot going, Lewis and his kids find themselves on a vague facsimile of the original Lewis and Clark trail, following the abusive, mentally unstable and very armed Stanley.

The Discoverers is a comedy, of course; what happens in the film is too horrific to be anything else. It’s also a rather haphazard affair, with too many quirky moments and familial conflicts that make little narrative sense, but are included simply for the sake of a story. Stanley is irredeemable, so much so that Lewis’ repeated attempts to connect with him are strictly unbelievable. Lewis’ bond with his kids is far more satisfying, both emotionally and cinematically, as is his burgeoning romance with fellow re-enactor Nell (Cara Buono).

Much of the patchwork plot line can be forgiven thanks to some fine performances, including David Rasche in a supporting role, displaying his usual impeccable comedic timing. Dunne exhibits the same, playing Lewis as a man just barely holding it together despite a decades-long buildup of fear simmering just under the surface. But there is no scenery chewing, no manic catharsis or self-righteous speech to set things right with Lewis, only a man who is mostly collected but not always calm, and it’s this lighter touch that keeps the sometimes gallows humor from turning maudlin. Equally impressive is Martin as his daughter Zoe. She’s sarcastic and wise, human and accessible, and surprisingly capable despite the emotional chaos swirling around her.

The relationship between Zoe and her father is the key to the film, and the direct antithesis of Lewis’ relationship with his own father. Both he and his father are obsessed with Lewis and Clark, Stanley drawn to what he feels were the good old days, while Lewis has internalized the history, appropriated it as a metaphor for his own problems. For all his talk about how poorly Native Americans were treated and how York was, despite his significant contribution to history, shrugged off, Lewis doesn’t realize that his problems are in no way comparable to the struggles of Native peoples or slaves.

Sadly, the film doesn’t realize it, either. It’s a narrative construct with a lot of potential, ultimately dealt with in a superficial manner. Similarly, the location shots of the American Northwest in fall and solid, workmanlike cinematography make The Discoverers a lovely watch, but there are just a few too many times something is framed because it’s nice to look at, but doesn’t fit the emotion or intent of the scene. Still, it’s a testament to how strong writer-director Justin Schwarz’s script is, and how uniformly terrific the performances are that, despite its weaknesses, The Discoverers is a pleasant, warm and funny film.