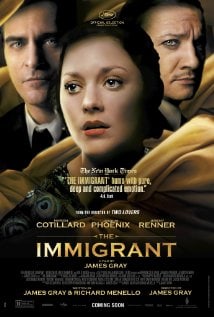 James Gray, the heir to Frank Borzage, John Keats, Jacques-Louis David and Gordon Willis, is among America’s most underappreciated filmmakers, this in spite of the fact that his work is the very distillation of American movies; aspects of the silent cinema and Hollywood’s respective Golden Ages (the 1930s and the 1970s, naturally) frame his style, though his voice is unique enough on its own. At the center of his films are families, and the idea that family is the nexus of great love and great suffering. Like the Romantics, his stories are governed by instinct rather than structure and are cautious if not outright averse to irony and cynicism. He specializes in melodrama, but his films aren’t campy; they’re operatic, but not sensational. He gets to the inner lives of his characters through sudden surges of emotion and gradual shifts in psyche, revealing a constantly churning subtext residing beneath his stunning, awe-inspiring surfaces.

And really, the surfaces are almost enough. Gray is seemingly among the last directors to treat cinema as a visual medium first and foremost; words used to describe his images are typically reserved for other forms—painterly, velvety, inky, the like—a testament to both his ambition and his sympathies. More than merely beautiful, Gray’s images are communicative. Each frame is intended to evoke the most inscrutable aspects of subjective experience; his images, elegantly designed and lovingly composed, are lived-in worlds for his characters and resplendent gifts for his audience.

He’s most often labeled a classicist, but Gray is interested in far more than what’s “classical” about contemporary art and cinema—he’s interested in what’s been forgotten. Much of what’s been forgotten can be found in The Immigrant, a period drama and the latest addition to his dishearteningly pithy oeuvre. The film opens with a shot of the Statue of Liberty, set against a hazy sky, her back to the camera. It’s 1921, and Ewa Cybulska (Marion Cotillard) has fled Poland and crossed the Atlantic with her sister, Magda (Angela Sarafyan), who is removed from the inspection line by officials suspicious that her throaty cough is a symptom of lung disease. Informed that her sister will be quarantined in the island’s hospital for at least six months, Ewa finds herself at the mercy of Bruno Weiss (Joaquin Phoenix, one of Gray’s most frequent and important collaborators), an avuncular chap masquerading as a member of the Travelers Aid Society; he’s actually a seedy burlesque producer and pimp, the very type of scoundrel the TAS was created to stop. (Okay, so maybe Gray isn’t completely opposed to irony). He brings Ewa to the Lower East side apartment building where his cadre of whores reside; from there, a makeshift family is formed, though Ewa’s sights are squarely set on earning money to help her sister.

There are numerous subplots where that came from, though Gray treats them as melodic accompaniment to the central story of Bruno and Ewa, whose simultaneously affectionate and poisonous relationship is directly in line with Gray’s trademark themes; in many ways, The Immigrant not only references but retroactively strengthens the director’s earlier work. His first three films, Little Odessa, The Yards, and We Own the Night, deal with criminal underworlds and frayed family ties; his most recent work, the melodrama Two Lovers, documents a love triangle in devastating but no less gorgeous terms. And finally, The Immigrant, his first true masterpiece, combines both: Orlando (Jeremy Renner), a magician and Bruno’s embittered cousin, falls for Ewa, much to the chagrin of Bruno, whose similar feelings are complicated by his desire to own Ewa as much as care for her. Neither man can have her—not in the way they want, at least—but that doesn’t matter. Neither of them love her, really; she certainly doesn’t love them. What each offers the other is a sense of redemption, for themselves, their pasts, and their aspirations.

To his credit, Gray never casts the story as a didactic “American Dream gone awry” drama or a tawdry soap opera. The film remains fixated on the characters, and Gray handles the story and its steadily mounting stakes surely, treating the respective plights of his three primary players with assurance, and above all, sympathy. He never pits one character against the audience; instead, there’s a strong interplay between the three, and Gray plays their respective experiences like an increasingly expressive concerto of moral dilemmas. Their motives don’t always make sense, but they always ring true, and it quickly becomes obvious that Gray is aiming for new heights with The Immigrant. For starters, it’s an undeniable technical achievement, awash in gold and burnt brown courtesy of David Fincher’s favorite cinematographer, Darius Khondji, and brought to life by production designer Happy Massee, whose masterful re-creation of Prohibition-era New York City is rivaled only by Sergio Leone’s Once Upon a Time in America, but the film’s most revelatory aspect is Gray’s knack for expressing the unspoken: The looming Great Depression, the pull of European fascism, the hypocrisy of Prohibition, the presiding influence of Old World sensibilities—each sustain a tremendously tangible reality infiltrated by touches of the surreal (Renner’s levitation trick is among Gray’s most striking images to date) and the self-aware, illustrated in the film’s haunting final shot. In The Immigrant, form is bound to content, character inseparable from story, memory indistinguishable from time.

The influence of studio-era hallmarks hang over the film, and Gray is essentially working in a classical mode throughout, creating novelistic scenarios from dramaturgical strategies that nevertheless gel within a cinematic framework. But these aren’t simply qualifications for an erudite director; they’re mile markers for a gifted filmmaker who’s earned the right to be called a master. For every bit of classicalism in his work, one can not only find an instance of the modern—his films are classic in the sense that they reorient our idea of classicism—but also hope for a contemporary cinema.