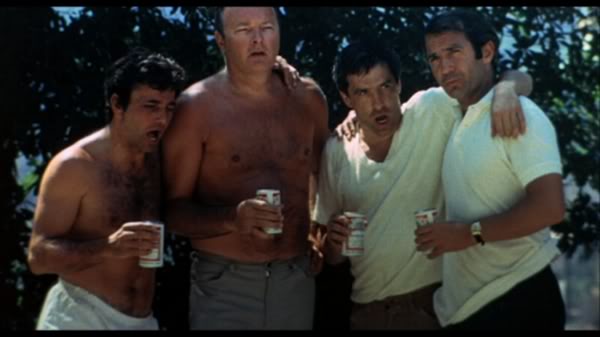 In an interview with New York’s Dryden Theater, which in 2008 was screening a retrospective of the films of John Cassavetes that included Husbands, Al Ruban, Cassavetes’ longtime collaborator and producer, said of the film, “We had…sold the picture to Columbia. Columbia also saw the first cut and they were not unhappy with it, but when John took the picture and re-edited it they were very unhappy.”

Ruban has quite a bit more to say about Cassavetes as a collaborator and artist, and he spares no punches in his recollections of his brilliant friend. But this particular story, about Cassavetes bullishly defying his distribution studio, seems like a particularly apt distillation of him: he was a man whose films projected his itch to get under people’s skin. He would never be content with a film that people liked, or that would make money, because, as Ruban suggests, if people liked it, Cassavetes felt he wasn’t doing his job as an artist. So when a film had a natural flow or a pleasing scene, Cassavetes went back and drew it out into formlessness. This was one of his famous working methods, and, for better or worse, it encapsulates the mindset of the man who produced a unique body of work.

Husbands is a frustrating movie to say the least. It concerns three middle-aged New York men, Harry (Ben Gazzara), Archie (Peter Falk) and Gus (Cassavetes) as they drink and carouse their way through New York and London on a bender in mourning of the fourth member of their man-clan, Stuart (David Rowlands, seen only in still photographs). It plays out mainly over the course of two lengthy nights wherein the men give themselves license to be boorish and soused, possibly, the audience could conclude, in order to exorcise their feelings for Stuart.

The first is the night of the funeral, in New York. On the cab ride from the cemetery Harry says, “I’m not going home. I’m going to get very drunk.” The scenes that follow are long fulfillments of that promise. The most famous scene in the film takes place in some sort of dingy German-style beer hall and shows the three men swilling and provoking every other bar patron to sing them songs. It dips in and out of a disturbing tone, as the particularly drunk Harry mercilessly berates a woman trying to sing to him for having bad tone. The scene drags out, shapelessly, for nearly 30 minutes of occasionally fascination improvisation from the three actors, before Cassavetes mercifully cuts to the bar’s bathroom, and the men throwing up remorsefully. Ruban, again, recalls Cassavetes’ method: “I suggested shortening the bar scene…For me, I wouldn’t put up with bullshit from these guys for more than five minutes…[In Cassavetes’ cut] these guys seem kind of arrogant and boorish in their behavior, so even when they go in and throw up, the impact is not quite there…But he (Cassavetes) was rather curt with me when I made that suggestion. He wanted it his way and ‘fuck it!’ “ 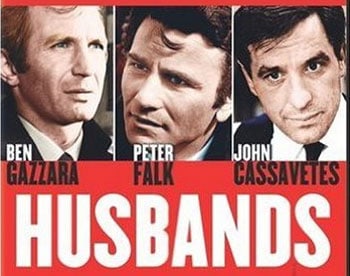 Ruban and Cassavetes had a brief falling out over the film, but clearly Cassavetes got his way, because Husbands continues to ramble and swell long after the bar scene. Harry returns home from the bar and fights with his wife, and is very possibly prevented from murdering her by Archie and Gus, who then take him off to London for more decompression. There they check into a hotel, rent some tuxes, and hit the craps tables and the English women. They fail at gambling but succeed in bringing three pretty Brits back to their hotel, where the second long movement of the film takes place.

As with the beer hall scene, the long night in the hotel is mainly a show of the actors’ improvisation skills. They each take a woman (Archie’s is a mute Chinese girl, Harry and Gus each boozily woo British blondes) to their bedroom and let their Ids run wild. Gus is a cackling madman who always seems on the brink of raping his girl (the next morning Cassavetes shows them amiably fighting over coffee in a pub) while Archie becomes frustrated at girl’s refusal to talk and Harry cries to his about his depressing normal American life of wife, house, job and kids. Each scene goes on long after the point is made, the actors allowed to riff endlessly and repetitively. Falk, Cassavetes and especially Gazzara are remarkably assured, which is undoubtedly Cassavetes’ ace in the hole. Without great actors, people wouldn’t allow the indulgences his films are constantly granted.

The following day Archie and Gus decide enough is enough and head back to the States, but Harry decides to stay, though the scene in which he makes this decision was apparently left on the cutting room floor; Gus and Archie fly back to New York without him, and the movie is over.

There’s no movie like Husbands, for better or worse. There are moments of brilliance – of very naked acting that do seem to say something profound about the frustrations of middle-aged maleness that could not have been said in a more traditional movie – dotting the over-indulgent two hour and twenty minute runtime. But it’s a film whose bloat and excess are as in-your-face as possible, and it’s often confusing what Cassavetes was intending. Watching and being alternately entranced and frustrated by his work, of which Husbands is the prime frustrator, leaves a person with the impression that Cassavetes had no overarching philosophy, but somehow felt that pure acting, if good enough (and with himself, Falk and Gazzara in front of the camera he insured good acting) would reveal enough about character to move an audience and produce a work of art. If pressed, I would probably wind up deciding that Husbands is a work of art, but the vacillation it would take to get there would probably be the most satisfying thing Cassavetes could have someone take from his work.