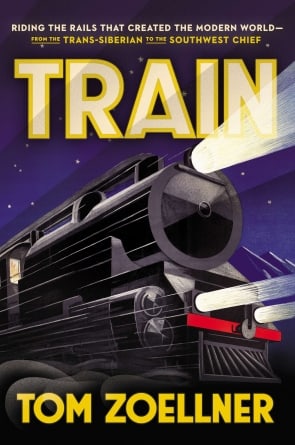 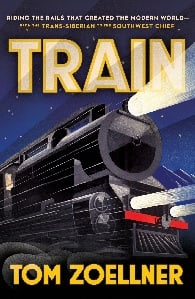 The introduction to Tom Zoellner’s new book Train opens with a simple, personal anecdote. He describes riding in a passenger car in Pennsylvania 20 years earlier, noticing a young woman reading a book and crying to herself. It’s a brief, remarkable piece of specificity, but it’s a good indicator of where the book will go. Zoellner manages to walk the delicate balance between autobiography and non-fiction admirably, travelling the world in an attempt to make a case that not only are trains still a relevant part of modern life, but a vitally important one.

He also begins with something of a caveat: that he is an American author and an admitted lifelong fan of train travel. Zoellner is aware that in much of the United States, this is thought of as hopelessly old-fashioned, if not downright antiquated. At first, he comes off as a little defensive in describing the personal advantages of riding the train; no traffic jams, you can listen to your iPod, the hypnotic rhythm of the tracks themselves. But thankfully, he wastes little time before combining his personal narrative with the history of railroads, tracing their development down to the early 19th century and the various engineers who have been assigned or taken credit for steam power. He cites earlier precedents, like the grooves that laborers worked into ancient roads by hauling cargo over regular routes, but the development of the train in parallel to that of the modern world is his thesis.

And it’s a fascinating one. Zoellner has written several non-fiction books prior to Train, notably the diamond investigation The Heartless Stone: A Journey Through the World of Diamonds, Deceit and Desire, but Train truly shows the depth of his research and his ability to convey it in an engaging, wholly understandable manner. Over the course of seven chapters, Zoellner describes his travels over the major railroad networks of the world, including America’s decrepit Amtrak, Russia’s Trans-Siberian Railway, the massive, post-colonial network of India and several others. Through each, he delves in the cultural perception of trains, both on a macro-level of history using expert testimony and via conversation with fellow passengers. It’s truly absorbing, and while Zoellner is prone to romanticizing his journeys and the sometimes disorienting nature of train travel, his colorful descriptions of historical changes are engaging.

More than anything else, Train does have an axe to grind. Zoellner is relentless in his belief that worldwide usage of railroads as cargo haulage and increasingly as public transportation is one of the secret pillars of modern civilization, and while he’s not wrong, the book feels a bit overweighed with opinions that share his own. Not that there’s anything wrong with an author having a slant (and he’s certainly not shy about inserting himself into the narrative to do so), it sometimes feels like overkill. But aside from that, Train is a truly fascinated and well-written examination of a technology that sometimes feels like an outdated modernity, one that makes a good case for it as piece of the past ready to rise again.