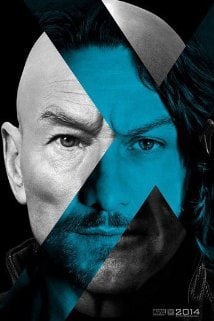 [xrr rating=3.25/5]Do we live in the Golden Age of comic book movies? Each summer, more and more superheroes hit the screen, the multi-plex as crowded with mutants, aliens and villains as one of Marvel’s mega-crossover storylines. According to a recent article on Screen Rant, Marvel Studios may even have its films mapped out until the year 2028. I will be in my fifties then. A good chunk of the 2028 superhero box office demographic hasn’t even been born yet. Like the mutants in its famed X-Men series, Marvel has found a way to adapt and survive, jumping from page to screen in money-burning fashion.

We’ve already seen films from Captain America and Spider-Man this spring and now Wolverine, Professor X and Magneto return in X-Men: Days of Future Past, a movie that ties down all the disparate threads in the X-Men film universe and tames them into a streamlined story. Director Bryan Singer, who left the franchise after the first two installments, returns after utterly failing to revive Superman and tries to make sense out of not only his earlier films, but a series reboot featuring younger incarnations of Professor X and Magneto, two Wolverine solo outings and that shitty film that Brett Ratner slapped together.

Fourteen years is a long time since we began this X-journey, but in his return, Singer brings us the best installment in the saga since his last go-around, X-Men 2. But with two parallel universes occurring at the same time, Singer takes a risk by making a movie that captures the X-Men of both the past and the future. So we get both Patrick Stewart and James McAvoy as Professor X and both Ian McKellan and Michael Fassbender as Magneto. It’s a tricky act to balance two storylines and while one definitely takes precedence, Days of Future Past mostly works, even if its pat ending completely negates everything that has happened in the six prior installments.

The film opens in a future where time is running out. Government-created robots, called Sentinels, are hunting down and killing all mutants. A few of the survivors, including Professor X (Stewart) and Magneto (McKellan) make one last daring play to defeat these unstoppable aggressors: they send Wolverine (Hugh Jackman) back in time to stop Mystique (Jennifer Lawrence) from killing a scientist (Peter Dinklage), a murder that triggers the creation of these mutant-hunting mechs.

The future scenes may be jarring, but things settle down once Wolverine lands in the ‘70s and begins to search out his X-Men comrades. Professor Xavier (McAvoy) is a broken mess (following the proceedings of X-Men: First Class), cared for by Beast (Nicholas Hoult) and no longer using his powers. Magneto (Fassbender) is being held for a political assassination in a cell deep beneath the Pentagon. Not only does Wolverine need to find Mystique, he first must convince his future friends that the future of mutants is at risk.

Singer smartly concentrates on just a few of the mutants in Days of Future Past, relegating other characters such as Storm (Halle Berry), Iceman (Shawn Ashmore) and Kitty Pryde (Ellen Page) to nothing more than glorified cameos. However, Evan Peters completely steals the show in his few scenes as a young Quicksilver, making me wish Singer and screenwriter Simon Kinberg could have figured out a way to utilize that character a bit more.

While Days of Future Past is one of the stronger comic book films to emerge from Marvel, it still suffers from the same issues that plague all of the films coming out of that studio. Despite its grandiose themes, it is impossible to really accept any harm coming to its characters. Every moment of suspense is quelled by the knowledge that these characters will either survive or be resurrected again at a later date. Even when franchises fall apart (see Superman and Spider-Man), all we need are a few years and then a new series is launched. Marvel may be ushering in a new era of comic book films, but in many ways it’s the same thing each and every time. And don’t worry, the next installment is already slated for 2016.