October 30, 2020
Home Books Mudhoney: The Sound and the Fury From Seattle: by Keith Cameron 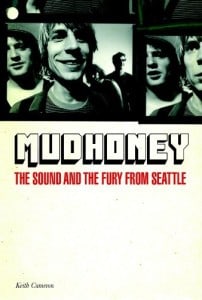 [xrr rating=3.75/5]Mudhoney is one of the great might-have-beens in rock history. Instrumental in the creation of the Seattle grunge scene—to the extent that pioneering record label Sub Pop was known as “the house that Mudhoney built”—the band embodied the loose, punk-meets-heavy-metal vibe that the genre was to become famous for. More than their better-known brethren such as Nirvana, Soundgarden or (especially) Pearl Jam, Mudhoney were immersed in the grunge scene before there even was a grunge scene, and even scored the subgenre’s first classic hit, the ridiculously catchy, Stooges-on-speed ditty “Touch Me I’m Sick.”

It’s a shame, then, that the band never really broke big. Sure, they played their share of festivals, plenty of sold-out gigs, they toured with both Nirvana (a disaster) and Pearl Jam (an unexpectedly fun time). They played Europe, South America and countless spots in between; for a band that once aspired to releasing one obscure single that could be unearthed twenty years later, they have ended up with a string of full-length albums and a small but devoted following. Grunge might be long dead, killed in 1994 by Kurt Cobain’s shotgun, or maybe years later, of a slow, wasting disease (‘N Sync Sydrome? Bieberitis?), but somehow, miraculously, Mudhoney soldier on.

Keith Cameron’s biography of the band is lively and fast-paced, a fascinating snapshot into the conditions that led to the Seattle grunge explosion in general and Mudhoney in particular. Cameron pulls a great deal of information, including pithy quotes from band members and others, from a wide range of other books, magazine articles, and interviews, but he also has plenty of firsthand information from frontman Mark Arm, guitarist Steve Turner and others. Cameron writes from a British perspective, and his wide-eyed enthusiasm for American music is palpable—particularly the rough-edged intersection of punk, hardcore, and metal that bubbled up from the Pacific northwest in the late 1980s.

In many ways, the arc of the band’s fortunes is familiar from everything from Spinal Tap to Anvil! The Story of Anvil. Mudhoney never reached the heights of commercial success attained by Nirvana; nor did they flame out. Rather, they achieved some degree of success, carried on the same wave of near-hysteria that buoyed up their more successful fellows. Soon enough, that well of enthusiasm dried up, the kids moving on to other idols (Britpop, nu-metal, Eminem, whoever) and the band couldn’t catch a break. Drug use, label indifference, dwindling audiences, band infighting: you’ve seen this movie before. Somehow, though, the band overcomes these struggles, and carries on to this day releasing well-received albums of energetic, innovative rock and roll.

Cameron’s book charts the band’s ebbs and flows through a lively mix of reportage, band biography, conversational tidbits and you-are-there reconstructions. He opens with a scene from Mudhoney’s first-ever UK tour, a wild affair that saw a near-riot break out in the audience, then backtracks to discuss each of the band members in turn. Throughout, the tone remains enthusiastic without ever quite becoming cloying: “Perhaps the main reason Mudhoney have survived is thanks to a shrewd assessment of how important rock’n’roll really is… Asked in 2013 for the secret of how to survive 25 years as a band, Mark Arm replied: ‘Not giving a shit.’ ”

Later, the band’s debut EP is described thusly: “An epochal impact of hair, beads, and vintage riffology, Superfuzz Bigmuff both looked and sounded like some long-lost relic from a mythical psychedelic-punk era, where good times were guaranteed and nobody was afraid to rock out.” Compare this to the description of the band’s major-label debut, Piece of Cake, “the work of a band consciously overcompensating for what they considered to be the corruption of US underground bands who lost their edge upon entering the corporate realm.” Yeah, that sounds like something fun to listen to.

This is a book that should be of great interest to fans of grunge, or of rock history in general. It’s unlikely to change your mind about the music; if you liked it before, you’ll like it now, and if you hate it, then no amount of chipper enthusiasm is going to change your mind. However, it might change your mind about Mudhoney, if you’re one of the many listeners who (like myself) never game the band their due. The Sound and the Fury From Seattle is a story of persistence in overcoming adversity, and of making great music along the way.