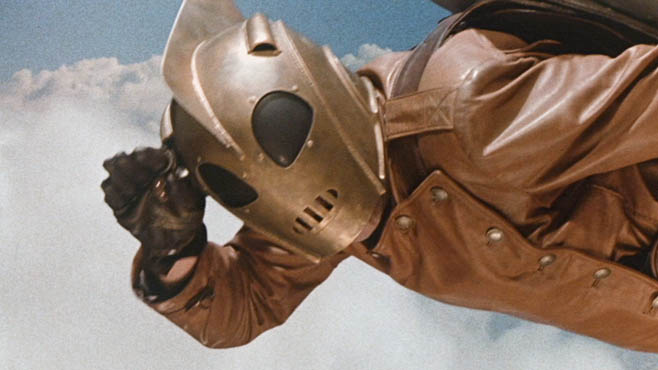 It’s a dark world out there for superheroes. Right now, our greatest comic book heroes are an obsessive, violent orphan with a thing for flying mammals, a drunken industrialist on mobile life support and a hairy Canadian with severe post-traumatic stress disorder. While there’s been some effort to add a little old-school heroics to the current spate of film adaptations (like Captain America: The First Avenger), they’re almost as quickly swallowed up by the grit and grime that has been in vogue since the 1980s (like Captain America: The Winter Soldier).

But there have been sporadic attempts at a simpler, more sincere kind of superhero over the years. After the tremendous success of Tim Burton’s 1989 Batman, audiences suddenly seemed open to comic book adaptations, so why not toss some out there and see what sticks? After the franchise-killing Superman IV: The Quest for Peace (1987) put Big Blue out to pasture for another 19 years and the 1990 Captain America failed to make a movie star of J.D. Salinger’s son, we needed a hero that was unambiguously heroic, good-hearted and if possible, patriotic.

The Rocketeer succeeds on all those counts and more. Created by Dave Stevens in 1982, the titular character was a throwback to film serials of the 1930s, the same kind of outsized adventure stories that gave birth to the Indiana Jones and Star Wars franchises. As the secret identity of barnstormer pilot Cliff Secord, the Rocketeer is the simplest kind of superhero: he punches the bad guys, he saves his best girl and incidentally, he flies by aid of an experimental jet pack or “rocket.” In a very fundamental way, he’s the ideal American hero, an essentially ordinary guy who does his best in extraordinary circumstances.

The 1991 film adaptation of the comic fully understands that the appeal of the Rocketeer is nostalgia for a more innocent time (one that really only exists in hindsight). The actors in the film don’t look so much like human beings as marquee posters come to life, from the square-jawed Billy Campbell as Cliff, a radiant Jennifer Connelly as his actress girlfriend Jenny and most particularly, Timothy Dalton as Neville Sinclair, the dashing Nazi secret agent. The latter is the movie’s secret weapon, a movie star overtly based on Errol Flynn, complete with filmed sword duels and a pencil mustache. As Sinclair, Dalton seems to be having a ball, embodying the glamour of the golden age of Hollywood along with its more sinister undertones. 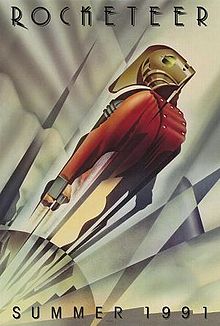 The central trio appears less as ordinary mortals and more as archetypes of a golden age, and fittingly, so do their surroundings. One of the film’s central scenes involves a nightclub named the South Seas filled with celebrities, each of whom nods chummily to Sinclair the movie star, while a white-clad big band plays torch songs. Jenny and Sinclair dance under a spotlight, and the whole thing couldn’t be more artfully staged. Combined with Hiro Narita’s warm cinematography (which brings to mind Caleb Deschanel’s work in The Natural) and James Horner’s alternately wistful and bracing score, it’s a movie that doesn’t even pretend to be naturalistic. It’s going for what we wish heroes would be like, in more clear cut world.

In many ways, The Rocketeer feels most like another film inspired by the film serials of yesteryear: Raiders of the Lost Ark. Both have the same sense of sometimes dangerous wonder and sly tone; a scene in which Cliff masquerades as Sinclair’s waiter in particular in a masterpiece of deadpan reaction from Dalton. The action sequences in which Cliff actually flies are themselves charmingly retro, sharing a great deal of Indiana Jones’ mix of grace and buffoonery. There’s a reason for all of this: director Joe Johnston was a protégé of George Lucas and was an effects man on all three original Star Wars films and the first two Indiana Jones.

While The Rocketeer is never naturalistic, neither is it cartoonish. Unlike Warren Beatty’s Dick Tracy (which was released the previous year), Johnston doesn’t try to transmute the bold colors and stylizations of the comics page to the screen. Instead the characters of The Rocketeer are more like amplifications of real people, with villains being the most black-hearted of scoundrels and heroes the most trustworthy. After all, it’s a world in which a man who flies by means of a personal rocket pack designed by a genial Howard Hughes (Terry O’Quinn) is at the crux of a plot between the FBI, a Nazi agent masquerading as a movie star and a pack of mobsters. In that world, all you need is a good heart and a strong punch to defeat the bad guys. And maybe a rocket pack.