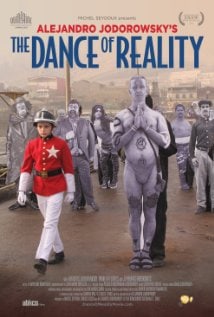 [xrr rating=2.5/5]That Alejandro Jodorowsky would make an autobiographical film tinged with his trademark surrealism is less surprising than a straight biopic would have been. The director frequently steps into frame beside the boy playing his younger self (Jeremias Herskovits), offering commentary and sometimes directly intervening in the boy’s life to provide spoken and physical guidance. It’s an amusingly literal illustration of the tacit desire of so many memoirs, especially those of artists with unhappy childhoods, to go back and let their miserable doppelgängers know the full life that awaits them.

By the same token, it’s also a fitting summary of everything that hinders the film’s aspirations to a singular vision. The highly chromatic, ill-fitting series of tableaux admirably abandon the illusion of objectivity (or even a rationally viewed subjectivity) to celebrate the role imagination plays on memory. Yet for a film intended to reflect both its maker’s personal experience and unorthodox aesthetic, so much of The Dance of Reality feels old-hat, begging the question whether something can be surreal if you feel like you’ve seen it before.

The most obvious point of comparison is Amarcord, another phantasmagoric reverie of smudged memory by a director who came of age under fascism. Young Alejandro has a tyrannical father, Jaime (Brontis Jodorowsky, the director’s son), who insists on his son adhering to his conception of unbending manliness even as he presides over Communist meetings populated by queer comrades. His mother, Sara (Pamela Flores), is pure Fellini, a buxom figure of Oedipal temptation who wears tops so low-cut she looks as if she were toting watermelons in a sling. For added measure, she never speaks her lines but instead sings them operatically. Occasionally, she strips naked and embraces young Alejandro, perhaps just to prove that Fellini, in comparison, was actually subtle.

The tension created between Sara’s unconditional love and Jaime’s loving conditioning provides the film’s bedrock in early scenes that skip wildly through brightly festooned frames and include such sights such as amputees, little people and loincloth-clad shamans to throw the viewer. Within short order, however, the imagery takes on a heavy-handed symbolism that makes obvious political points. In fact, the first shots of the film depict a shower of coins raining behind the director as he dully compares money to blood, Jesus and Buddha. In case you didn’t get the point, a horde of dirt-covered, diseased poor shuffle into frame from time to time, taking no note of the members who collapse and begging for help that they then ravish out of maddening starvation and thirst. Every now and then, Jodorowsky hits upon a witty bit of symbolism, as when Jaime, usually decked out in Stalinist clothing, responds to fascist crackdowns by donning the hyperbolically loyalist outfit of the local Fire Brigade, but even his sense of humor is curdled by its blunt meaning.

Most distracting of all is the manner in which the second half is ceded almost totally to Jaime as he finds himself grappling with his morality and conviction when he and his comrades get a chance to assassinate President Ibáñez (Bastián Bodenhöfer). Brontis Jodorowsky gives the film’s best and most charismatic performance, not unlike that of Pete Postlethwaite’s equally bestial yet passionately adoring father in Distant Voices, Still Lives, but his assassination attempt and subsequent failure of nerve completely separate him from his family, creating an actual narrative centered on his Ulysses-esque journey home that clashes with the more free-form visuals of the first half. Jaime’s quest for self-absolution comes off as an externalized means of the son giving the father forgiveness, but while that offers a few emotional payoffs, it keeps Alejandro off-screen for a significant chunk of his own reminiscence.

Through it all, though, The Dance of Reality never captures Fellini’s ineffable spark in reproducing a taffy-pulled memory, a reflection of the artists’ differing sensibilities: where Fellini celebrated his hang-ups and sought out the beauty of even his most traumatic experiences, Jodorowsky’s film is steeped in pessimism that reads most of its complexities as mere hypocrisy. That’s not to say that Jodorowsky’s viewpoint is not valid, or even that it is not unfair to compare the director to Fellini when he has his own established history to drawn upon. But despite the obvious personal connection of the project, and the verve with which the director attacks some of the material after a 23-year gap in filmmaking, there’s something missing here.

The film’s gradually revealed plot gives less an impression of a carefully planned progression of images than a ceding of authority to biopic convention. Even so, the most moving scenes are often the most literal, in those moments where the director interacts with his fictionalized alter-ego and reassures him that his fear and pain will produce a successful, content human being. Too many biographies get lost in unpleasant memories, and too few have the confidence to risk accusations of egotism by openly and unapologetically reveling in the safe place reached in spite of, and through, suffering.