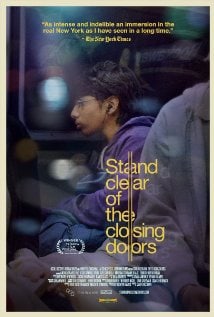 [xrr rating=2.75/5]Is there a fine line between the autistic child who has difficulty in school and the neurotic single mom who struggles to give her two children a good life? Sam Fleischner’s film Stand Clear of the Closing Doors suggests a spectrum of behavior that we may recognize in ourselves even if we have not been clinically diagnosed. The film isn’t a thoroughly convincing or compelling drama, but in observations small and large, it reveals the breadth of human behavior and experience as one in which dysfunction is a matter of degree as much as the DSM-V.

Ricky (Jesus Sanchez-Velez, an untrained actor with Asperger’s) is an autistic 13-year old who we meet at one of his favorite places in the world: Rockaway Beach, Queens, the same shore memorialized by the Ramones. As bagpipes play incongruously, we see Ricky stare into the sky and shout at seagulls as a jet flies into his point of view. The seagull sky cuts to Ricky’s single mother Mariana (Andrea Suarez Paz) spraying a shower stall that’s she’s cleaning in an apartment where she keeps house. Is housekeeping a way to monetize OCD cleanliness?

Ricky is a strange kid, but is he really that strange? He walks to school with his big sister Carla (Azul Zorrilla), whose girlfriend demonstrates a sexy crab walk. Strange behavior can be playful as well as dysfunctional; but there’s a point when strange behavior becomes more than eccentricity. Ricky is smart – Carla relies on her strange little brother to fix the internet connection when it goes out at home – and is a prolific and talented magic marker artist, papering his bedroom walls with drawings of sea monsters. But when he’s upset, his behavior becomes erratic, and he pisses without lifting up the toilet seat cover.

He becomes even more upset after his mother scolds him for skipping school. As Ricky tunes out what he doesn’t want to hear, he fixates on a gang jacket with an image of a dragon eating its own tale. This sea monster leads him on an impressionistic odyssey in the New York subway system. As Ricky goes down the rabbit hole of his consciousness, Stand Clear becomes experimental cinema, if only for a few minutes. Ordinary images of digital video become out of focus lights of subway tracks as Ricky mutters the names of subway lines to himself as the train heads into Manhattan.

The boy goes missing for a few days, during which time Hurricane Sandy, not to mention Halloween, approach, each of which brings their own nightmarish vision to a boy whose imagination sometimes gets the better of him. His journey approaches horror, but also a simple longing, as the lost traveler pays a lot of attention to families on the subway with young children who seem to have a stability and togetherness he lacks. The film’s subway sequences have plenty of documentary interest as we see the press of New York rush hour commuters as well as buskers and delinquents. As much as I love watching people on the New York subway, there are too many subway scenes in the film, its 102 minute running time feeling padded by a good fifteen minutes.

Tragically, the film mirrors a real-life incident that occurred after its 2013 premiere. In January of this year, an autistic boy went missing in Queens and was spotted riding the subway. That true story did not end as well as Stand Clear of the Closing Doors. Regardless, this is a finely observed film that avoids being maudlin, even if the boy’s disconnect is accompanied by a bit of an audience disconnect. Still, there may be extenuating circumstances for the film’s wandering ways. Production was indeed interrupted by Hurricane Sandy, which forced Fleischner to rethink the end of his script and work the natural disaster into the film. The storm is an apt metaphor for the mental storms of young Ricky and of the New Yorker’s struggles after and even before Sandy. But that fascinating backstory doesn’t entirely translate to the finished film.