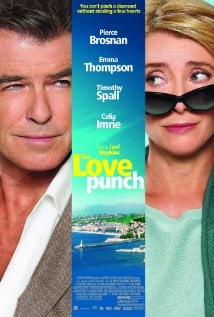 [xrr rating=2.0/5]Honestly, Emma Thompson can do no wrong. Her comedic timing is impeccable. She can walk down red carpets with pigs all day long and still be considered one of the greatest actresses of her generation. But that doesn’t mean that she can carry Joel Hopkins’ The Love Punch singlehandedly, despite her best efforts. After pairing with Thompson and Dustin Hoffman for Last Chance Harvey, Hopkins has returned with another middle-aged rom-com this time co-starring Pierce Brosnan.

Unfortunately, Hopkins’ cloying script and uninspired directing make for a hackneyed excuse for an adventure caper on the French Riviera. The implausibility of the plot could be forgiven if the final film were funny, but Thompson and Brosnan lack any chemistry and the plot is so forced that viewers are more likely to cringe than laugh.

The premise is the most basic if contrived excuse to get our leads to a picturesque location imaginable: Kate (Thompson) and Richard (Brosnan) are a divorced couple who barely finish seeing off their daughter to university when Richard discovers that his hedge fund company has been bought and immediately run into the ground by a Turkish business tycoon, Vincent (Laurent Lafitte). To recoup their life savings and his employees’ pensions, Richard and Kate reunite to carry out a “brilliant” heist (which the characters repeatedly insist is “brilliant”) in Paris. Their plan is to kidnap and impersonate a rich Texan couple, crash Vincent’s wedding and steal a $10 million diamond from his fiancée (Louise Bourgoin). Neighbors Jerry (Timothy Spall) and Penelope (Celia Imrie) also lend a helping hand in this ridiculous heist.

Shedding the somewhat more ruminative exploration of middle-aged romance that he explored with poignant sincerity in Last Chance Harvey, Hopkins here makes a 180 straight into a bumbling, adventurous romp. And Hopkins’ inexperience with the genre shows in nearly every aspect of the film. The Love Punch has virtually no set-pieces and instead relies on a series of desperate and often crass jokes to carry the comedy. Thompson tries her hand at milking the comedy out of Kate’s poor French skills, complete with frantic and unhelpful hand gesturing. Hopkins even resorts to the clichéd slow-motion airport arrival to introduce Kate and Richard’s partners in crime. Whether it’s chatting on Skype with their computer hacker son while his roommate masturbates in the background or finally infiltrating the bridal suite only to be met with a roomful of flowers and cats (Kate and Richard’s respective allergies), The Love Punch can’t seem to move beyond the most simplistic and cliché comedy.

Script aside, the actors here do their best with the material, and they are, no doubt, the biggest draw the film has. Spall, Imrie, Thompson and Brosnan together make a great ensemble, and it can’t be said that any of them hold back even when the contrived comedy might have benefitted from some hesitation on their part. But no, they gladly parade onto the beach in scuba gear and moonlight as oil-rich Texans. Their willingness to defer to the comedy is commendable but doesn’t make any of these hackneyed images any funnier. Brosnan’s performance, however, is an unquestionable disappointment. He delivers his lines with no semblance of sincerity either in his comedic scenes or his attempts at the emotional. And his chemistry with Thompson seems severely lacking, hardly portraying a romantic couple, married or otherwise.

Its mediocre plot could be forgiven were it not for the consistently flat comedy in The Love Punch. Hopkins appears to have assembled a compelling cast and set them out to portray the year’s most contrived caper. And it’s not as if one can’t imagine why The Love Punch was given the green light. Recent years have seen surprisingly successful comedies geared towards more mature audiences: Hopkins’ Last Chance Harvey, The Best Exotic Marigold Hotel and numerous Meryl Streep vehicles. The Love Punch could have added itself to the list were it not for its whitewashed, purposefully innocuous and drab story.