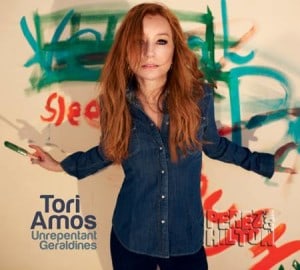 [xrr rating=4.0/5]With a recent foray into classical music on Night of Hunters (2011) and Gold Dust’s orchestral interpretations of her back catalog in 2012, it seemed like Tori Amos had left her contemporary pop days behind. Last year’s musical staging of The Light Princess for the National Theatre in London suggested that this was how she planned to grow old gracefully, abdicating her earlier career and setting herself new challenges outside the image and age conscious pop world. This new work was worthwhile, but lacked the visceral punch of Amos’ heights of righteous indignation, sly sedition and her richr inner life.

Unrepentant Geraldines is so satisfying because it proves that Amos has not given up on pop music. More moody than confrontational, the album recalls both Little Earthquakes (1992) and Under The Pink (1994), its storytelling lyrics rooted to an inner truth, its intimacy and connection reliant on her piano and rich voice. From the very start, Amos weaves a spell that shuts out the rest of the world. The Beatlesque opening of “America” weaves a fine tapestry for her breathy sighs and vulnerable vocal catches. Her stylized singing stretches out, creating a dreamy detachment that complements the oblique lyrics. Her protagonist, “the other America,” is sketched with the barest of details, and it’s not until the flashy psychedelic pop of the bridge that her political message creeps in. Then the hypnotic lethargy of the piece becomes a commentary itself. The protective shell lingers even as she shifts gears and throws off the languor for the work-song cadence of “Trouble’s Lament.” It’s a strong lead single for the album, offering a frisson of dark abandon in her knowing tone as she sings, “If danger wants to find me/ I’ll let him in.”

At this point, the album seems to promise a roster of allegorical woman characters, but Amos breaks the pattern with “Wild Way,” and this is where Unrepentant Geraldines moves into deeper currents of confession and disclosure. Although the arrangement gradually fills out, it starts out as a stripped down ballad of piano and voice that showcases her painful emotional ambiguity. Amos conveys the weariness of being worn down by the broken chemistry of her relationship, yet she’s still wistful for what once was. She sidesteps the wordplay and clever conceit of the first two pieces with lyrics that are stark and direct, “I hate you/ I hate you, I do/ I hate that you’re the one who can make me feel gorgeous/ With just, just a flick of your finger/ It is that easy.” It’s a powerful moment that shows that Amos can still capture the raw truth of songs like “Mother” or “Me and a Gun,” but with more clarity.

The album flows smoothly from this auspicious beginning, with plenty of notable moments. The duet with her 13 year old daughter, “Promise,” calls back to Amos’ smart pop and infuses it with modern R&B swoon. The title song is a stripped down, lazy evocation of “Cornflake Girl” and “God,” from Under The Pink. But my favorite track looks more forward than back. “16 Shades of Blue” is built upon Amos’ archly precise vocals and light piano accompaniment, but the production is thoroughly up-to-date. Producer-collaborators Mark Hawley and Marcel van Limbeek apply a heavy hand, twisting the initial recording into an arty remix. They add electronic fills and sound effects, program an understated beat and mutate the vocals. The contrast is particularly apropos because the lyrics are a jaundiced take on aging and relevance. The piece walks a fine line; it would be easy to slip into pastiche, but it works because it preserves Amos’ pensive and poisonous intent. Although this is one of two outliers on the album, the artistic risk pays off, even as she almost sneers, “There are those who say/ I am now too old to play.”

The other odd duck, “Giant’s Rolling Pin,” doesn’t fare as well, more for context than content. It’s a whimsical potshot at the spooks and spies of the world, with the jaunty feel of early pieces like “The Wrong Band.” It doesn’t mesh with the rest of album, and might have worked better as a bonus cut outside the tracklist flow. Despite that minor quibble, Unrepentant Geraldines is a remarkably consistent, strong album. On “Oysters,” Amos sings, “‘Cause I’m working my way back/ I’m working my way back to me again.” It’s been a long time since she started, but she’s definitely still herself.