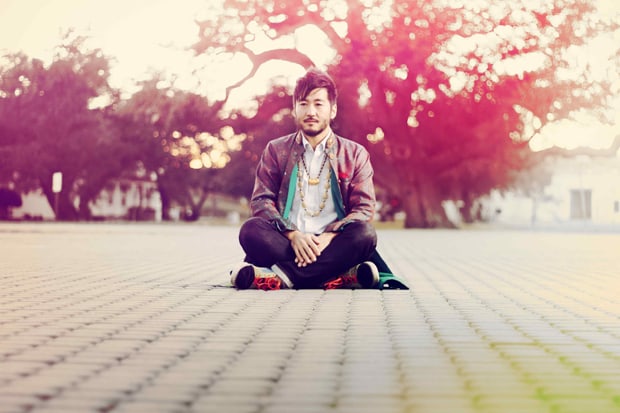 The last time I saw Kishi Bashi, he stood alone on stage, equipped with nothing but a microphone, loop pedals and his violin. It was early 2012, and he was playing to the way-early crowd at Portland’s Crystal Ballroom, warming the stage for Deerhoof and Of Montreal (with whom he was a touring member). At that point, his debut album—the well-received 151a—had yet to drop. Unknown at the time, the man born Kaoru Ishibashi performed an impressively lush yet carefree set that won over the gathering crowd.

Two years later, Ishibashi has considerable indie cred. His sophomore LP Lighght has earned as much acclaim as his debut, and he’s picked up a notable following that identifies with his masterful musicianship, whimsical flourishes and heart-on-sleeve lyricism. When he walked into Portland’s Wonder Ballroom, its stage decked in white gossamer drapery as though the gear was set up on clouds, it was clear he reveled in the role of headliner as well.

After a generous crowd response to fledgling opener Plume Giant, Ishibashi took the stage to a mostly packed house with a full touring band in tow. Any doubt that fame would affect the artist’s genuine stage banter was squelched immediately as he asked the crowd, “Portland, you ready for a great time?” Throughout an over 90-minute set, Kishi Bashi fulfilled that promise.

Soon after the band launched into set opener “Philosophize in It! Chemicalize with It!” (Lighght’s lead single), a woman behind me told her boyfriend to stop singing along so she could hear. With the positive energy flowing around the room, you can’t blame him. After just two songs, Ishibashi was already wiping his face with a towel and ditching his hipster suit jacket. Throughout the set, the touring band showed as much musical diversity as the star of the show. During 151a’s “Atticus, In the Desert,” this came in handy as Ishibashi broke a violin string mid-song and the amply-bearded banjo player (who also played with a reed at times) threw down an extended hand-drum solo on the rim of his instrument.

The energetic set was frontloaded with material from Lighght, which went over well even though you could sense the audience gearing up for their favorites from his debut. The band played off each other’s energy and looked to be having as much fun as the audience throughout the night. During “Beat the Bright Out of Me,” everyone but the drummer crouched to the floor, and Ishibashi finally started using more of his trademark looping gear. Always talking to us as though we were old high school friends, he even asked the audience for a 9-volt battery at one point when one of his pedals was about to die.

Singer-songwriters with touring bands inevitably play a few solo songs late in their sets, and this show was no different. Before his first solo number, Ishibashi discussed Gaia and the personification of Earth, providing the humorous caveat “I don’t really believe it, but it’s interesting to think about.” As he announced the title for “Bitter Sweet Genesis for Him AND Her,” he paused to recognize that same-sex marriage had been legalized in Oregon earlier that very day. The crowd roared.

Other highlights were solo versions of the strange love song “I Am the Antichrist to You” and the gorgeous “Manchester,” which closed his set. During the latter, the crowd sang along to the more emotional vocal moments. This prompted the artist to stop and exclaim, “You guys are throwing me off. That’s amazing!”

The encore featured a furiously played if imperfect “Bright Whites,” after which Ishibashi teased the audience, “What — not funky enough for you?” before diving into a beatbox-driven remix version. That would have been plenty of excitement for one night, but from there the band decided to really have some fun. After a rowdy, off-the-wall J-pop cover, the band launched into an audacious cover of Paul McCartney & Wings’ “Live and Let Die.” By its end, Ishibashi was jumping into the audience and crowd surfing while filming himself with a camera on a stick. He ended the night with a jubilant “It All Began with a Burst,” which sent us out of the venue with smiles on our faces. Kishi Bashi has come a long way, but he’s stayed true to himself. It’s hard to think of another musician who seems as absolutely thrilled to be performing. With a fair share of rough edges, this show wasn’t the best concert I’ve been to all year, but it was by far the most fun.