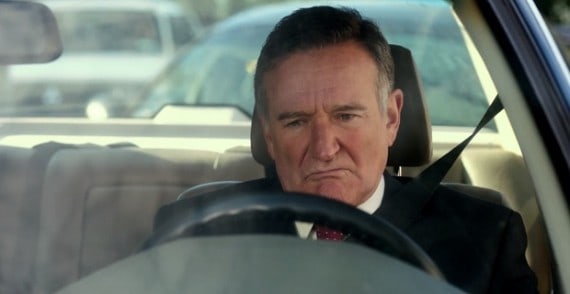 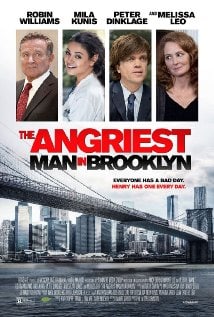 Robin Williams is a funny man, we’ve been told for decades. He was a Gary Marshall sitcom star in the 1970s and graduated to full leading man status by the 1980s with Good Morning Vietnam, while also being both instrumental and a detriment to the stand-up comedy boom of the same era. At this point, it’s virtually a matter of historical record that Williams is hilarious, but really…is he? His filmography is as full of dramatic roles as it is comedic; he’s won an Academy Award and been nominated two other times for the former. The Angriest Man in Brooklyn tries to have it both ways with the actor, flipping between black comedy and sentimental drama without ever really nailing down whether he’s really going for laughs or pathos.

As the titular character, Henry Altmann (Williams) is indeed an angry, angry man. He is first introduced in a gauzy-looking park outing with his wife (Melissa Leo) and two sons; never has a man looked so content. But then the movie flash-forwards to the present day, in which Henry has curdled into a man simmering with rage at, well, basically everything. In an odd choice, the film is recurrently narrated by Williams, speaking in third-person about his character, then by Mila Kunis, doing the same for hers. For her part, Kunis is Sharon Gill, a young, strung-out doctor struggling with their never-ending stress of the medical profession and a workload dumped on her by a colleague, which includes Henry.

If things seem a little complicated already, it keeps going. Henry arrives for a doctor’s appointment already furious, whereupon a panicking Sharon tells him that he not only has a brain aneurysm, but has only 90 minutes to live. Right, that’s minutes, which is later referenced as the same amount of time that it takes to roast a turkey breast. For whatever reason, Henry takes her at face value and storms off into the city to make amends with his family, schtup his wife one more time and have a farewell party for himself. While that would be quite enough, Sharon also discovers that he actually does have an aneurysm, and an indeterminate time to live.

While the premise takes a lot of suspension of disbelief, something could be made of Henry’s journey out into New York City. On one hand, he could have a cathartic breakthrough about how his rage and neglect of his family has affected them all, turning the movie into a redemption story; on the other, he could face the myriad irritation of the city as they get in the way of his perceived 90-minute countdown. Unfortunately, The Angriest Man in Brooklyn wants to have it both ways. Director Phil Alden Robinson never seems to decide whether the movie should be a deeply black comedy about a man who can’t help being an insufferably sour misanthrope even while clutching at the last moments of life, or a sentimental tale of a man learning to bond with his family and come to terms with his mistakes. It just can’t be both.

Of course, it’s not strictly fair to place the blame solely on the film or Robinson, a veteran best known for 1989’s Field of Dreams. The Angriest Man in Brooklyn is an English language remake of the Israeli film The 92 Minutes of Mr. Baum by Assi Dayan, which might account for the puzzling runner of context-less Judaic references in the film, but certainly doesn’t excuse its schizophrenic tone. It doesn’t help that Williams puts in some of his most stilted work in years, with each angry rant sounding like he’s just an HBO stage away from going into his tired stream of consciousness riffing. Even with a talented cast behind him, which includes cameos by James Earl Jones, Richard Kind and Louis CK (most especially a great understated turn by Peter Dinklage), the movie just never gels. By constantly trying to go in two directions, The Angriest Man in Brooklyn doesn’t seem to go anywhere.