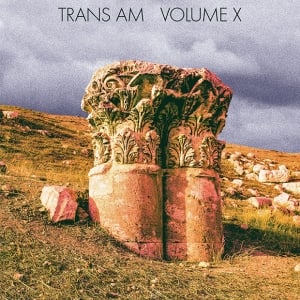 [xrr rating=3.5/5]If there was ever a band to demonstrate that labels are meaningless, it would be the long-lived but under-the-radar band Trans Am. Wikipedia sticks them under the vague umbrella of post-rock, but their tongue in cheek web site declares their sound as “heavy American electro rock.” Whatever you call them, over the years, they’ve been happy to appropriate elements of just about everything they’ve ever heard: classic rock, electronica, new wave, heavy metal and Krautrock just begin the list. Volume X, their appropriately named 10th release, tries to shoehorn in all of these into a single muddled heap of songs. While the plaid and polka dots juxtaposition is clearly intentional, it’s hard to tackle the album as a coherent whole, even though the individual tracks are pretty good.

Trans Am kicks off with “Anthropocene,” where an ethereal wash of synth heralds in a grinding psychedelic excursion into the middle of some arcane rite. Saw wave guitars set a plodding zombie pace, accented by the band’s trademark savant drum work, full of flourishes and hyperactive fills. Echoed and twisted shreds of keyboard provide a hint of relief to the otherwise oppressive heaviness. It’s a solid start, promising further journeys through heady darkness and brooding obsession. Rather than build on this intensity, they springboard into an unexpected direction. “Reevaluations” lives up to its title, calling the last five and a half minutes into question. Where the previous track trudged through a thick grungy miasma, the one percolates, blending Devo style new wave with Ozric Tentacles space rock. As a standalone piece, the crystalline structure and repressed tension work together to lure the listener in deeper, but in context it’s just a jarring transition. Even though the next couple of tracks gesture towards continuity, with synthesizers and syncopation, they don’t actually mesh either. By the time we persevere through these additional flavors of electronica to reach the fifth track, the band seems afraid that we’re getting complacent. So they decide to reshuffle the deck and dive into a metallic shredfest for “Backflash,” locking into a repetitive fan-blade rhythm vamp. We’re halfway through the tracklist and it feels more like a well-shuffled iPod playlist than a planned series of songs by a single band.

Trans Am’s established fan base may well be used to the short attention span. In any case, they’ll find plenty of familiar elements on Volume X, like the tight drum work, twisted electronics and processed vocals. But it’s hard to imagine the group winning many new converts with this grab bag collection. It’s frustrating, because I can find things to like about most of the multiple personalities they try on and discard on this album. Still, it’s telling that my favorite track is probably the least representative. That should be a high bar to pass, but “Insufficiently Breathless” has little to do with any of the other tunes. Rich flourishes of 12-string acoustic guitar provide a stately canvas for a variety of melodic additions. Where most of Volume X favors unsettled tension if not overtly stressful moods, the album closes out with a gentle psychedelic tip of the hat to short-lived progressive rockers, Captain Beyond. Trans Am does a decent job of referencing more than just the title, falling into the same introspective meandering that their inspiration delighted in.

As pleasant a finish as this is, it still leaves me a bit dazed. Almost any step along this winding path could serve as a jumping off point for a whole record’s worth of creative exploration. By trying to hit them all, Trans Am barely manages to look out their window at the possibilities.