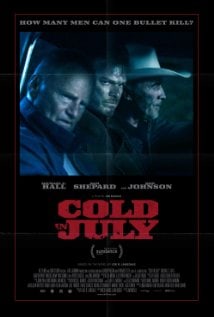 [xrr rating=4.5/5]Cold in July is a bloody and full-throated Texas noir, a twisty little tale of small-town justice, revenge and redemption. Based on Joe R. Lansdale’s book of the same name, Cold in July bears all the hallmarks of your typical pulp novel: an innocent man stuck in a nasty situation, corrupt cops, sinister ex-cons and showboating sidekicks made up of equal parts loyalty and testosterone. The film opens with a literal bang in the very first scenes, as Richard Dane (Michael C. Hall) kills an unarmed robber in his living room, the thief’s blood saturating the couch, his brains decorating the walls.

This is Texas, and not only is Dane not charged, there is no investigation, the local sheriff (Nick Damici, who co-wrote the screenplay with director Jim Mickle) merely informing him that the man he killed was a wanted criminal anyway. What he doesn’t tell the hapless Dane is that the dead man’s father (Sam Shepard), a violent ex-con, is about to be released from jail, and just can’t wait to find the man who killed his boy. Don Johnson also appears as Jim Bob, a flashy fixer type who rides into town on a red convertible complete with novelty plate and longhorns on the hood.

For the first half of the film, there are no real surprises; once the stakes are laid out early on, the rest is a delicious, slow burn. Cold in July is a top notch neo-noir, tightly plotted and with excellent performances all around. There is a chemistry between the leads that is frankly astonishing, so much so that it essentially telegraphs a crucial plot twist, but this twist is key to a mid-film shift in perspective, a gutsy narrative trick that fully pays off.

Set in 1989, Michael C. Hall sports a corker of a mullet, magnificent in its accuracy. Cold in July boasts a pitch perfect ’80s atmosphere, complete with flowered upholstery, spare white walls, Sansabelt slacks and even an episode of “The Master” playing on TV. The overall style is heavily influenced by cinema of the 1980s as well, with elements borrowed from neo-noir directors such as William Friedkin and the Coen Brothers. There’s a spectacular synth score, too, and subdued tones with moments of deep gemstone colors breaking through dark shadows.

It’s a beautiful looking film, populated by a host of troubled (and troubling) guys, all exhibiting, to differing degrees, the kind of hypermasculinity inherent to the genre. This in turn allows for the tropes that make pulp so compelling to American audiences, primarily the use of violence to wrest power from the bad guys. As society has changed, however, its morals have also changed, and though these culture shifts are reflected in all films — in all art — this phenomenon is arguably most notable within the noir genre. Cold in July, then, is a fascinating look at our not-so-distant past, filtered through the lens of a crime thriller, of a time when redemption came at a different price, and at the genesis of a culture shift that we’re still reeling from today.