Seymour Moskowitz (Seymour Cassel) is on a flight from New York to Los Angeles sitting next to a mother who can’t get her young daughter to eat airplane food. The conservatively dressed, beauty-shopped mother squeezes the girl’s mouth, scolds her and practically abuses her in a scene that plays as uncomfortable slapstick. Moskowitz, all handlebar mustache and counterculture long hair, has another way. He picks up a carrot stick and does a Bugs Bunny impersonation. The girl immediately relaxes and is eager to play along, which means eating her vegetables.

This vignette sums up how John Cassavetes directed his actors—by disarming them. His wife and muse Gena Rowlands once pointed out that “he thinks he doesn’t give directions, but he’s constantly telling you what to do.” Cassavetes motivated his actors by unusual means. Sometimes these were playful means, like forcing Cassel to eat six ice cream sundaes for the soda fountain scene. Sometimes his mischief was more loaded, like forcing Cassel to wake up a napping Gena Rowlands before rehearsing a major scene. Cassavetes didn’t want his actors to fall into conventional cinematic ideas of emotion; he wanted to get his actors’ defenses down, to free them up enough to reveal genuine emotions.

Moskowitz’s flight, domestic in more ways than one, brings him closer to his unlikely love, Minnie (Rowlands). This episode doesn’t push along the plot but it establishes character, and shows what the unkempt, impulsive Moskowitz will bring to his relationship with Minnie, and to the movie: a genuine, disarming kindness. Cassavetes struggled to depict real emotions in a world that he felt had lost the ability to communicate them. His unconventional direction mirrored his unsentimental idea of love as nakedness and imperfection, violent mood swings and awkward tenderness.

The film is episodic and loose as one would expect from the director of Faces. But due to more restrained cinematography and a more focused script, it’s more grounded. The director gives his actors enough room to make mistakes, but shaped the finished product into an arc that allows for control as well as chaos. 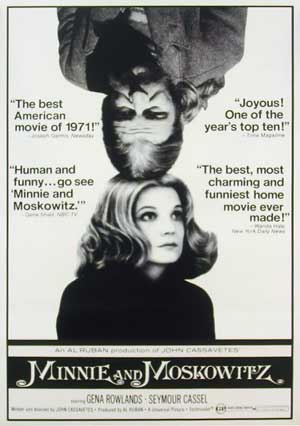 We meet Moskowitz on duty as a parking lot attendant, doing significant salt of the earth labor: this is a man who helps other men find a place to rest. It can’t be rewarding work, but the lanky Moskowitz has a spark in his step, leaping over guardrails and bounding off like a hippie cowboy ready to rustle up the next iron horse.

In the typical curse of the Cassavetes drama, Moskowitz has trouble connecting with people, from Morgan, a crazy guy he meets at a diner (the irrepressible Timothy Carey) to a redhead he tries to pick up at a bar. The studio cut a scene where Moskowitz takes the girl home, but that scene’s absence reaffirms the sense of alienation: you see bar patrons rough up Moskowitz, but you don’t see him get lucky.

In Los Angeles, Minnie has similar problems with her fellow man. Specifically, with men. She rails against the bill of goods she’s been sold by the movies, that she’ll never meet a Clark Gable or Humphrey Bogart. But then you see the men she ends up with: her abusive, married boyfriend Jim (played by her husband, who didn’t let her know until just before shooting the scene that he’d be playing that role), and Zelmo (Cassavetes regular Val Avery), who takes her on the worst blind date ever. Minnie’s scene with Zelmo echoes Moskowitz’s with Morgan, and Avery seems to be channeling Carey’s rage, his professorial desperation devolving into an intensely violent mania. Avery and Carey are terrific supporting players, finding the humor in their characters’ mad despair, but never letting you forget that they are human.

Minnie has a terrible day, smacked around by Jim, harassed by Zelmo and stalked by Moskowitz, who at first saves her from Zelmo’s attack but soon follows her around in his own manic desperation. You can’t imagine how he could end up with her. Cassavetes injected elements of his own relationship with Rowlands into Minnie and Moskowitz’s odd courtship, and despite the characters seeming incompatibility, their union is finally credible and touching.

Despite Minnie’s protests that love isn’t like it is in the movies, Minnie and Moskowitz comes off like Cassavetes’ screwball comedy. The unlikely lovers both love old movies. While Cassavetes’ charges in Faces sang 19th century parlor songs like “Jeannie with the Light Brown Hair,” his odd couple sing” I Love You Truly,” a movie duet made famous by Jeanette MacDonald and Nelson Eddy. The director found inspiration in an unlikely Hollywood legend. “When I started making films, that was exactly what I wanted to do, make Frank Capra pictures. But I’ve never been able to make anything except these crazy, tough pictures. It’s not intentional. You just are what you are.” Minnie and Moskowitz are who they are, crazy and in love.