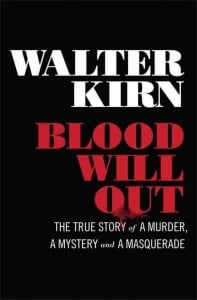 [xrr rating=3.5/5]With Blood Will Out, Walter Kirn achieved two things, one of which diminishes the other. He wrote a good true crime book, but he shows he could have written a much better memoir. These ideas do not necessarily work against each other, and in a longer work, they likely wouldn’t. But at a brisk and spare 252 pages, Kirn flies through the most exciting parts of his work and lingers on a series of courtroom scenes that shed no light on the what the author’s themes: the fluidity of identity, the mild psychopathy that settles into anyone in a strange place and the willingness of people to believe and trust others at all costs. This is unfortunate. With more balance, Kirn could have presented a brutal and self-lacerating highlight of autobiography.

Blood chronicles two subjects. Clark Rockefeller, who operated under a set of false identities for almost 30 years, and schemed, manipulated and even murdered his way across America, extracting what he needed from the people around him before he cut contact or disappeared. Narrating Clark’s 2013 trial for the murder of John Sohus, Kirn fills out the man’s backstory, as well as his own. These sections are engrossing, but often read like an excellent magazine article, and for good reason: Kirn covered the trial for The New Yorker. The exposure of Rockefeller’s numerous identities, as well as his basic brutality, has the mesmerizing quality of a whodunit unfurling without the author’s help. But it doesn’t necessarily feel like a feature book, and certainly not one by an accomplished author.

When Kirn focuses on himself, Blood is fantastic. His relationship with Clark opens the book, and the first chapters document their relationship, relating Kirn’s mental state over nearly a decade. We learn about his money woes, his family, his Ritalin habit and his time spent writing about meth heads in Billings, Montana. In these flashbacks, Kirn writes with snap and verve, infusing hindsight with a you-are-there urgency. The reader knows the author has made a big mistake, entrusting himself to a con artist, and writes as if he both does and doesn’t comprehend it quite yet. When he recounts Clark’s frequent lies about knowing JD Salinger, running a secret jet propulsion laboratory and being on the run from Chinese spies, it sounds ridiculous, and Kirn seems to know this even as he buys it.

This focus periodically returns, particularly during an extended section set at Clark’s dilapidated New Hampshire ranch that reads like a mix between horror and comedy. But as the book progresses, the trial takes precedence and it hurts the book. While its subject is fascinating and the murder’s details horrific, Kirn’s ordinary prose doesn’t elucidate anything from the trial that could not be picked up from any other account. The author claims he was taken in by Rockefeller’s phony identity, but he doesn’t let us in on enough of his interactions with Clark to prove his case.
Finally, Kirn reduces Clark to a supporting character, and turns in some of his most electric writing. “A writer,” he says, “turns his life into material, and if you’re in his life, he uses yours, too.” It’s a dark statement that rings true in a book of falsehoods. Kirn suggests that we all engage in a bit of phoniness in our lives, but with Clark there was simply no real identity, nothing behind the mask. When Kirn puts all of the right elements together, Blood is like no other book I’ve read. If only there were more of it.