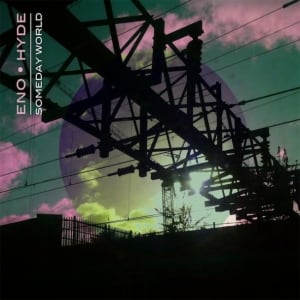 [xrr rating=2.75/5]What would you do with Brian Eno’s hard drive? The producer-composer-musician reportedly stumbled across files from an abandoned project that combined the minimalism of Steven Reich with the polyrhythms of Fela Kuti. Eno called it Reikuti, and he didn’t think it worked. But, having second thoughts, he enlisted the help of longtime collaborator Karl Hyde of Underworld to add words and music to these stray files. The result is the pair’s first full-length collaboration, and something that has become a rara avis: a Brian Eno song album.

Eno has spent much of the last 30 years working on variations of ambient music, and his work has been unsuspectingly heard by millions in a Windows launch theme (that, ironically, he composed on a Mac). But after leaving Roxy Music in the early ‘70s, Eno produced his most enduring musical legacy, a string of art-pop albums that blended art and commerce better than anything his old bandmates ever pulled off. Since 1977’s Before and After Science, with the exception of his 1990 collaboration with John Cale, Wrong Way Up, Eno has largely abandoned the song form that he excelled in so well. Like Eno and Cale, Eno and Hyde at times recalls Eno’s pop heyday, filtered with some of the rhythmic discoveries he’s made since then. But unlike Eno-Cale, Someday World is not a worthy successor to his essential ‘70s albums.

The man used to conjure interesting keyboard textures at will. Listen to the instrumental segments on his 1975 masterpiece, Another Green World, or the artificial
Araboiserie of his 1980 collaboration with Jon Hassell, Fourth World, Vol. 1: Possible Musics. From a pioneer of synthesized pop music, you’d expect something more than decent IDM. Someday World is no more than that, its intermittent strengths melodic and rhythmic. The collaborators don’t have Fela drummer Tony Allen on hand, but some of their rhythms mix with the expanded minimalism well enough to keep the album listenable, if not consistently memorable.

“Daddy’s Car” is the album’s first “single” for a reason: it has a catchy melody (as does “A Man Wakes Up”), built on a foundation of bright, danceable polyrhythms punctuated with soul horns. But a track like “When I Built This World” represents the best and the worst of the album, an experiment in counterpoint that just doesn’t work. Its opening melody recalls the pop standard “When I Fall in Love,” but it shifts course drastically with a jerky synth rhythm that hints at where this album could have gone. The music reaches heights that recall Terry Riley’s “A Rainbow in Curved Air,” but the saccharine chorus sinks it. Did Eno really need Hyde for this? The album closes with “To Us All,” whose soaring melody harks back to the title track from Taking Tiger Mountain, which you should listen to instead.

Eno never had the most expressive vocal pipes, but his modest, unembellished delivery (kind of like an art-rock Fred Astaire) had the charm to sell everything from the menace of “Blank Frank” to the tenderness of “I’ll Come Running.” Hyde’s vocals give Someday World a smooth surface that was exactly what Eno didn’t need. When he assembled the band for 1974’s Here Come the Warm Jets, Eno sought out musicians who would be in conflict. “[I] got [those musicians] together merely because I wanted to see what happens when you combine different identities like that and allow them to compete…. [The situation] is organized with the knowledge that there might be accidents, accidents which will be more interesting than what I had intended.”

I wish I heard accidents on Someday World. Despite the apparent cross-purposes of Steve Reich and Fela Kuti, if there is any creative tension on the album, I can’t hear it. In that sense, this may be a successful artistic collaboration after all. But it’s one that lacks sparks. Someday World could use some of the fight between harmony and discord, silence and noise, Moloch and the muse, that make Eno’s ‘70s solo albums hold up decades later.