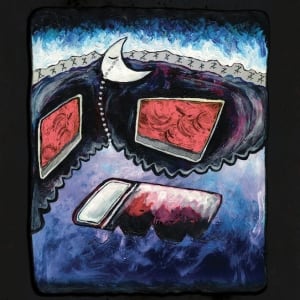 [xrr rating=3.5/5]What a wonderful time to be an electronic music fan. And if you like your synths and keyboards tinged with pop, there’s a bounty of artists for you. Braids, iamamiwhoami, Crystal Castles, Grimes, Chvrches, Purity Ring and Hundred Waters are the current stars of a new wave of electronic fused pop. What’s wonderful about this group is that each of these artists has found a niche to fill. They might be under the same genre umbrella, but each band experiments and latches on to ideas that would feel alien to the other groups. Hundred Waters, for their part, don’t have one defining trait like the hyper-violence of Crystal Castles or the massive pop-appeal of Chvrches. Instead they split their time between different moods and themes, fluttering between neo-soul and ambient. The versatility they bring to The Moon Rang Like a Bell is their best strength for most of the album. Despite a few sidetracked songs, it’s hard to get bored with the shifting music.

The album does stumble out of the gate. Opening track “Show Me Love” is an acapella track that isn’t connected to the rest of the album’s sound and “Murmurs” is the record’s blandest track. Thankfully the album’s second single “Cavity” kicks in after “Murmurs.” “Cavity,” though an excellent song, is an outlier in the record. The humming synths and Nicole Miglis’ vocals recall a track by The xx, with an ending coda amped out with massive backwards keyboards filling up the song. The rest of the album is carved into two sounds. The first, spearheaded by album highlight “Out Alee,” focuses on sparkling keyboards over up tempo rhythms. The second is based around lead single “Down from the Rafters,” songs that are more somber and dirge-like than the surrounding tracks.

The bouncier handful of tracks brings out Miglis’ peculiar and fantastic vocal delivery. The liner sheets for “Out Alee” might read, “There out alee/ There out a’leaning/ Thought I saw lightning.” Miglis twists the words in her mouth and even drops into spoken word so the line ends up being “The-there outa lee/ There outa leanin’/ Ta-da saw Lightnin’”. Miglis doesn’t possess a powerful voice, but her lines are slippery and shifting. Over the near off-tempo beat of “Innocent” Miglis gives a seductive but creepy performance: “It’s all very cruel/ Ain’t it darlin’?/ Come lie here, say it’s okay.” The gorgeous and fluid “Seven White Horses,” along with the album’s brightest song “Xtalk,” round out the up tempo group. “Seven White Horses” builds brilliantly thanks to drummer Zach Tetreault. Miglis spits her words out in a rapid fashion as Tetreault works his snares into a frenzy for the song’s climax.

The trio of songs that make up the album’s center round out the rest of The Moon Rang Like a Bell’s best tracks. The title for “Broken Blue” perfectly describes the song, as keyboards that were once pillowy before they were feed through distortion create a morning atmosphere for Miglis quietly stunning vocals. “Chambers (Passing Train)” is the album’s starkest song with Miglis’ voice ringing out like a bell. “Down from the Rafter” has already received praise for its unorthodox hook—if you can call it a hook. The violin-like line moves unnervingly over simple organ arrangements, implying a disturbing scene, what with the title referencing a hanging. These three songs best present Hundred Waters’ mastery of layering. The space between the sounds makes these songs all the more captivating. Hooks tease and hint at future notes making build ups and releases all the more cathartic. This is their second album, by the way. It’s thrilling to image what will come in the next few years.