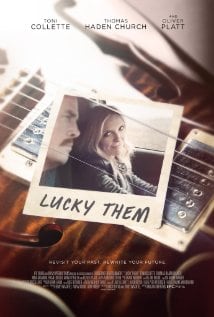 [xrr rating=2.0/5]The creators of films about writers should expect harsher criticism from writers, but the flaws in Lucky Them don’t stem from any sketchiness in the portrayal of seasoned Seattle music critic Ellie Klug (Toni Collette). Rather, Megan Griffiths’ semi-autobiographical film (co-written by Huck Botko) establishes an off-kilter indie tone and then struggles to follow a single thread when it comes to the plot. Choppy and seemingly directionless at times, the film explores a handful of genres: road movie, romantic comedy, mid-life crisis and coming-of-age film (albeit coming of age at 40). And somehow no single umbrella genre grounds the film and the result comes across as aimless rather than true to life’s struggles. Its faults don’t catapult the film into the reject pile, but, considering the potential in Lucky Them, Griffiths’ script woes are a disappointing obstacle for an underlying story that could make for an intriguing film.

If the opening credits’ list of executive producers is surprising, it’s because Paul Newman was actually trying to get Lucky Them off the ground back in 2008. After Newman’s passing, his widow Joanne Woodward joined the project as executive producer. And originally the film had Marisa Tomei, Alec Baldwin and Allison Janney set to star. I shudder to imagine Alec Baldwin in yet another comic relief role as a detached billionaire, but thankfully he was replaced by Thomas Haden Church as Charlie, Ellie’s bumbling ex. Collette and Church, joined by Oliver Platt and Ryan Eggold make for a solid cast and breathe life into the Seattle-based story with their spot-on performances.

Collette’s functional alcoholic Klug has spent the last 10 years writing for the rock magazine Stax and avoiding the disappearance (by apparent suicide) of former boyfriend and local rock legend Matthew Smith. Per Stax’s editor (Platt), Ellie must dredge up old memories and open old wounds by writing a personal piece on Smith to commemorate the ten-year anniversary of his disappearance or be fired from the struggling magazine. Seeing as Smith has been only assumed dead these past 10 years, Ellie first has to investigate the theory that Smith may be lying low somewhere in the Pacific Northwest. Funding her search is Charlie (Church) whose documentary classes at the local community college inspire him to make his very first film about Ellie’s assignment and buys an RV specifically for the project. Their search for Matthew doesn’t resemble a retracing of his steps so much as Ellie retracing hers – breaking into his childhood home, visiting the supposed site of his suicide and the camp where Matthew and Ellie first met – and exorcising old demons along the way.

Eliie and Charlie’s road trip isn’t as straightforward as one would assume. They follow one lead – fittingly to nowhere – and then return to their lives in Seattle only to begin the process all over again. Clearly, Griffiths knows that the pairing of Collette and Church is the strongest aspect of the film. Collette portrays Ellie’s hard-knock-life cynicism and vigorously suppressed obsession with Matthew with poignant sincerity. Charlie’s lines, ridiculous as they are, would sound cloying from any other actor, but Church makes an impossibly out of touch billionaire-documentarian surprisingly believable. His deadpan comedic performance is undoubtedly the highlight. Outside of their antic-filled trip, however, the film struggles to find a foothold with any engaging subplots. Ellie suffers a one-night stand (Eggold) to follow her around town, and Charlie marries a call girl environmentalist (Ahna O’Reilly). These extraneous events only detract from the development of Ellie’s story and serve to pad out the run time without adding thematic resonance or laughs to the film.

But even as far as the Matthew storyline is concerned, once Lucky Them commits to following Ellie’s journey to its conclusion, the finale is disappointingly flat. Ellie’s journey is clearly a personal one, a necessary revisiting of old haunts to once and for all be able to move on with her life. And the film at least gets that part right; Ellie manages to find closure for her quest and magazine feature. (Audiences will certainly focus on the film’s high-profile cameo, which honestly feels like pure pandering). But save for the enjoyable performances from Collette and Church, Lucky Them fails to delve too deeply into Ellie’s complexities for dramatic payoff and instead settles for an extremely forced ending, pairing off Ellie and Charlie, against all probability.