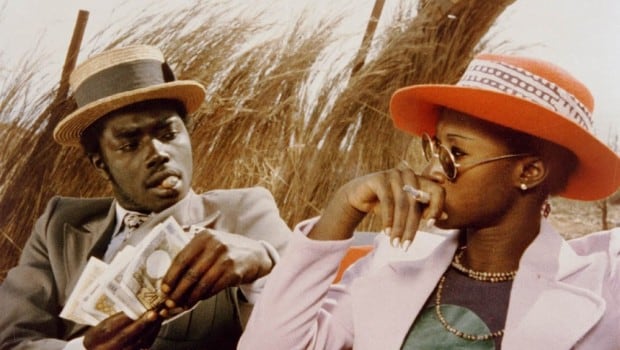 The ghosts of colonialism still cast a long shadow over Africa, and many films that emerge from the continent deal with the lingering effects and damage that European rule has caused its many nations. In cinema, Africa is a continent woefully underrepresented by homegrown directors. Not to be reductionist and lump all of its multifarious nations into a homogenous stew, but how many directors from Africa can you name besides Ousmane Sembène?

Though he lived a short life and produced a very small body of work, Senegalese director Djibril Diop Mabéty (1945-1988) and his film Touki Bouki (1973) are essential names in the canon of world cinema. Shot on a shoestring budget, Touki Bouki may deal with the themes of colonialism and poverty, but Mabéty creates a hybrid sort of film that melds the tropes of African storytelling with filmic techniques found in European movements such as the Nouvelle Vague.

Touki Bouki begins with a shot of a young boy leading a herd of steers across the Senegalese plain. It is the type of shot we’d expect from a film about Senegal, one that critic Richard Porton said could easily fit into the “premodern agrarian milieu” that often informs African cinema. Moments later, Mabéty takes us inside a slaughterhouse for the graphic killing of the herd. As blood gushes out in long shots of arterial spray, it establishes Mabéty’s Senegal as a French-influenced, modern industrialized nation, one that is still tempering its uneasy relationship with the traditions of the past. 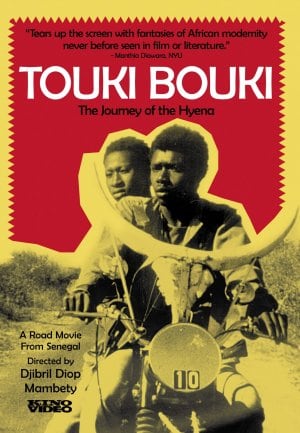 We soon meet Mory (Magaye Niang) and Anta (Mareme Niang), a young couple who dream of leaving behind the squalor of Dakar, Senegal’s capital, and escaping to the promise of a better life. The couple embarks on a series of crimes to gain enough money to earn passage on one of the many ships that carries the French away from the dust of Dakar and back to idealized cradle of comfort in Paris.

While the story may be simple, Mabéty employs enough strangeness to keep the viewer off-kilter through most of Touki Bouki, making the film a pleasure in its unpredictable editing and bizarre, less than linear narrative. Mabéty creates a world where anything is possible as we follow his pair of outsiders from one desperate attempt to make money to another, including a half-cocked heist to steal the proceeds from a wrestling competition and ripping off a rich homosexual who has the hots for Mory.

Touki Bouki, or The Hyena’s Journey, is much like its protagonist: unwilling to bow to European mores nor comfortable in settling for the fate of his countrymen. Mory is uninterested in taking part in any revolutionary group, but also finds no friends among those who practice any sort of traditional Senegalese lifestyle. When Anta’s aunt slaughters a goat, she denounces Mory as a no-good lowlife.

Mabéty knows that the promise of Paris and a better life is all fiction. Even if Mory and Anta escape the clutches of poverty, they will never find a true home in France. They will continue to feel alienated and alone there. Mabéty works wonders with juxtaposition and he returns us to the slaughterhouse in the film’s climax, showing us that the French have turned Senegal itself into an abattoir for young men and women hoping to break free and escape.