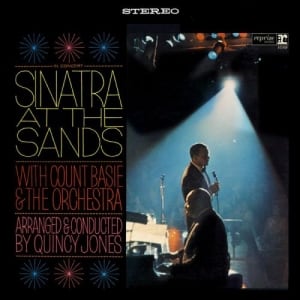 The term “triple threat” was once used frequently in show business—especially on Broadway—to delineate entertainers who could sing, dance and act with equal ease. They were considered the artists who were truly commercially viable, those who could pack the house or, in the case of the cinema, could make the film a blockbuster hit.

Frank Sinatra perhaps embodies the spirit of “triple threat” better than any other entertainer in recent history. Not only did he have the one of the most distinctive voices of the 20th century and win two Academy Awards for his acting, but he also was the very embodiment of “cool” for a whole generation. His immense talents and unique charms are on display in full force on the classic 1966 live record Sinatra at the Sands.

The sessions that comprise this album were recorded in January and February of 1966 at the Sands Hotel and Casino in Las Vegas. Sinatra had worked with Count Basie, the prolific, ubiquitous big-band leader, on two previous efforts, 1962’s Sinatra-Basie and 1964’s It Might As Well Be Swing. There’s no denying that the band and the vocalist have a natural chemistry. Sinatra’s voice can sound as sexy as a tenor saxophone, as fiery as a lead trumpet or as playful as a trombone. It’s no surprise that the great vocalist and the great bandleader were booked together for a series of dates at one of the classiest, most popular venues in America at the time.

Basie and Sinatra aren’t the only celebrity names associated with the Sands sessions, though. More than a decade before he found fame and fortune producing Michael Jackson’s most popular albums, Quincy Jones was a young jazz musician and composer. The arrangements on Sinatra at the Sands, some of the most celebrated in the standard big-band repertoire, flowed from his creative pen. The dynamism of “All of Me,” the erotic intensity of “I’ve Got You Under My Skin” and the pure joyfulness of “You Make Me Feel So Young,” executed flawlessly by Basie’s band, found their original expression on Jones’ composer’s page.

Sinatra at the Sands features signature versions of some of Sinatra’s most popular tunes, including “Come Fly with Me,” “Fly Me to the Moon,” “Angel Eyes” and “My Kind of Town.” Because of the force of Jones’ arrangements and the Basie band’s playing, these are perhaps Sinatra’s most well-known renditions of tunes he recorded and performed countless times. Sinatra’s clever, sophisticated banter with the audience between songs (We get quips such as “How did so many people get into my room?” and “One more? That’s what I’m gonna be saying to the bartender in just a few minutes. One more …”) reminds us that Sinatra was not just a talented musician, but a charming performer all around. He even performs a 10 minute comedy monologue in the middle of the set. While some of the humor in this performance, called “The Tea Break” on the recording, feels dated in its cultural references and casual racism, many of the jokes still land decades after they were first uttered.

Sinatra at the Sands isn’t all fun and games either. There are some tender, highly emotional moments, especially on the ballads. At the end of a starkly minimalistic version of “One for My Baby (And One More for the Road),” which features only Sinatra’s tender voice and an accompanying piano, the singer adds the lyric “It’s long … it’s damn long” to the standard tune. When he sings this line, there is a fragility and vulnerability not always associated with the singer. It’s as if you can hear everything the artist has gone through in life—a gritty childhood in Hoboken, several turbulent relationships, an inconsistent acting career—to become Frank Sinatra. This is why Sinatra at the Sands is such an essential record, the one Sinatra album everyone should listen to, even if they own nothing else by the Chairman of the Board. Here we have one of the best big bands in the business, an emerging composer/arranger who will become a legend and one of the most significant cultural icons of modern times, all working at the top of their game. While Sinatra at the Sands is a ritzy, sophisticated, fun affair, it’s also hard not to stand in awe of its participants’ unparalleled artistry.