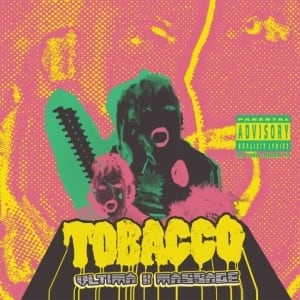 [xrr rating=3.5/5]Hailing from the Pittsburgh area, Thomas Fec (aka Tobacco) spent his childhood in a region that created beauty from the remains of an industrial downturn. Still known the world over as the “Steel City,” Pittsburgh avoided the collapse of the industry (which claimed many Rust Belt cities as cultural casualties) and has transitioned into a hub for creativity across technology, music, design and education. It’s the birthplace of the counter-culture icon Andy Warhol and the current home to left-field institutions like the Mattress Factory and the largest annual international gathering of furries.

Fec has established his neo-psychedelia career on a similar aesthetic of dysfunctional beauty. Better known as the frontman of the enigmatic Black Moth Super Rainbow collective, Fec has continued to experiment with forgotten analog synths for nearly 15 years, creating soundscapes that range from dystopian night terrors to beat-driven underground hip-hop fodder. On his third solo release, Ultimate II Massage, Fec finds new artistic poles, executing some of his most deconstructed offerings while pleasing battered souls with the analog waves of closing track “The Touch from Within”.

Fec isn’t the type of psychedelic producer that dabbles in intricately fusing together found sounds or pulling listeners through varying time signatures during a 14-minute cut; instead, he throws your brain in the spin cycle just long enough to detach you from your worries and get you wobbling deliriously across the dance floor or living room. At 1:48, “Lipstick Destroyer” is the second-shortest cut on the album and listens like a butchered TEED production laid atop an LCD Soundsystem b-side and then all-fed through some faulty 1970s speakers. Only 69 seconds long, “Spitlord” is the LP’s shortest cut; Fec eliminated almost 100% of his off-kilter production techniques for a track that is as blissful as the view from the top of Pittsburgh’s Mount Washington.

As with life, that moment of bliss is gone before it can truly be appreciated. However, Fec also has the uncanny ability to slowdown the passage of time around his beats. Maybe it’s the extended analog waves, familiar tones of Black Moth Super Rainbow’s Dandelion Gum era or the electro angst and chopped acoustic guitar arrangement used to close the track, but the sub-three minute “Good Complexion” sounds like a track twice its length. These abbreviated track lengths invite repeat listens, which is key to exploring the often-demented symbolism of Fec’s lyrics. For those that have never had the opportunity to see him perform live, the aural material is regularly accompanied by old-school porn, repurposed pop-culture content and (during a recent tour) footage of men provocatively rubbing their beards together. Track titles like “Creaming for Beginners” and “Eruption (Gonna Get My Hair Cut at the End of the Summer)” do little to foreshadow the barely-intelligible sensuality. “Lick that popsicle/ Like a mothafuckin’ baby mothafuckin’ would,” requests Fec during “Eruption,” following it up with a veiled reference to a powerful sexual release (“It’s a nice fuckin’ day and I’m feelin’ fuckin’ good/ Eruption, eruption”).

The release isn’t dominated by that sexual perversion, it just constantly lurks below the surface. Life is rife with perversions and chaos; we are all left to somehow find happiness and contentment within all of that noise. This powerful notion makes its way to the forefront of Ultima II Massage.