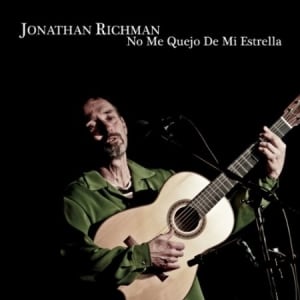 [xrr rating=3.0/5]Jonathan Richman’s latest release is a bit of an odd duck. It is not a proper album of new material, nor is it a traditional best-of record. Instead, it is a collection of 16 songs, many of them rarities or out of print, which was intended as “a gift for his audiences in Spain (and outside the US in general).” These are songs written over the last 15 years, but there is not a clear organizing principle except that they were all selected by their author (not by a producer or record label). Still, it has all the hallmarks of a post-Modern Lovers Jonathan Richman release–funny, sweet, observant songs played in an open, loose, heartfelt way.

The record kicks off with a pair of Spanish-language songs, “La Guitarra Flamenca Negra” and “La Fiesta Es Para Todos”. These are by no means Richman’s first forays into a Latin style of playing guitar. But there is something a bit awkward about the non-native speaker singing in Spanish. Richman’s tongue does not sound entirely comfortable wrapped around the words; though he may himself be quite fluent, he does not sound it.

Things pick up with the humorously Luddite third track, “You Can Have a Cellphone That’s OK But Not Me”. Richman is clearly a lover of ‘50s and early ‘60s rock ‘n’ roll, and this tune has that fun, bouncy feel, though played on acoustic guitar. “Look: when I’m on the beach, I’m on the beach/ No, you can’t call me there/ And when I’m on a walk, I’m on a walk/ No, you can’t call me there.” While simplistic and humorous on its surface, you can almost imagine this song as written by a Buddhist or a Be Here Now spiritualist. It is a song about being fully involved in the action at hand, and not being distracted by the electronic tether in your pocket. These philosophical influences can also be heard in the two takes on the song “When We Refuse To Suffer (I and II)”, where Richman says we must embrace our suffering and allow life to be interesting, as we cannot escape these feelings anyhow.

The title of the album itself echoes this simple acceptance of things as they are, not as they might be. “No me quejo de mi estrella” means “I do not complain about my star”. It is unclear to which star Richman refers specifically, though he is an artist who turned away from rock stardom early on and has seemed to shrug it off ever since. Now in his fourth decade of writing and performing, Richman has become far more comfortable with gentle ballads and acoustic instrumentation over the proto-punkdom of 1976’s The Modern Lovers. Now at ease in his skin, he sings as a man with few complaints.

Many of the songs on this latest collection are cut very simply, just strummed acoustic guitar and some brushed snare drums and perhaps a few hand claps. They are fun and easy to bob your head along to. But Richman, the perpetual folk rock troubadour, is one of those artists who will lull the listener with simplicity before taking a serious turn, injecting some depth into the levity, some melancholy into the mirth.

Richman is lovely in his jangly imperfection, and this honesty is also his delight in the world, as in “Her Mystery Not of High Heels and Eye Shadow” as he sings of a lover without pretension: “Well she don’t act cool and she don’t blow hot or cold/ Her mystery not of high heels and eye shadow/ Well she laughs when she laughs like you do when you’re five years old/ She loves the faded colors of the dark just like I do.” Indeed, this is a collection of songs unadorned, free of facade. It is not perfect, nor does it need to be.