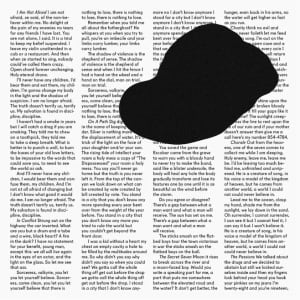 [xrr rating=3.75/5]The first words sung on In Conflict are “I am not afraid.” But fear seeps through every song: fear of failure, fear of decaying relationships, fear of leaving a priceless violin in a café. These fears are woven together, both thematically and musically, into the story at the core of In Conflict. It never becomes crystal clear what, exactly, is happening; the characters are nameless and personas shift between songs. The story does have a moral, though, and it revolves around acceptance—an acceptance of the fears and doubts that hide in the nooks and crannies of In Conflict.

Owen Pallett is known as a man behind the scenes. He’s composed arrangements for indie all-stars Fucked Up, Arcade Fire and the Mountain Goats. But he’s also worked with Duran Duran, Pet Shop Boys and Taylor Swift. It would be an exhausting to list his arrangement work, a list that’s sure to grow after his Oscar nomination for the soundtrack to Her. This history makes In Conflict a brilliantly polished record, but Pallett isn’t in the background, these are his stories and songs. In Conflict feels like a 22nd century musical. Of course even the bounciest tracks here have darker themes than anything Rodgers and Hammerstein would ever touch, but it still stands that the gracefully jumpy violin lines and Pallett’s own vocal performances do harken to a stage production rather than a traditional chamber-pop record. It also doesn’t hurt that Pallett has the Czech FILMharmonic Orchestra on his side for a few of these songs. They show up on the two instrumental tracks and the stately “Chorale” has the Prague-based players at their best, but Pallett contrasts their grand work with his indie-influenced side. “The Riverbed” charges along thanks to Brian Eno(!)’s guitar work and, combined with the crashing energy of the drums, it matches the FILMharmonic’s statements.

Pallett’s famed string work comes through the tip-toeing violins of “On a Path,” which are magnificent when combined with multiple Palletts in harmony. But the synthesizers take center stage on a good portion of these tracks. The softly humming keyboards on the title track are the best reminders of Pallett’s work on the score for Her, and on the other end of the spectrum is the manic rush of “Infernal Fantasy.” Meanwhile, “Soldiers Rock” is the only song that doesn’t reach the excellent standard of the rest of the album. Based around a childish melody and rattling percussion, it seems shoehorned in when compared to the grand tracks that surround it. Still, “Soldiers Rock” is only a small road bump in the album’s full scope.

Pallett’s synthesizer might be at its best on “Song for Five & Six.” It’s danceable and unnerving thanks to the undulating synth paired with Pallett’s phenomenal falsetto. “Song for Five & Six” is the first look into a darkness that lurks beneath the album. This gloom swallows the listener whole during “The Passions.” It’s the album’s eeriest piece with Pallett’s delicate voice tinged with regret as he recalls an affair. When he sings “Compassion” during the chorus it feels cold and desperate (he does describe his heart as “an empty cavity” early in the album). The chilly air continues to envelope the music on “The Sky Behind the Flag,” where a stark beginning of trembling drums opens into electronic pulses and wailing strings accompanying Pallett singing, “We need to lose control.” But that line seems ironic. Pallett has so carefully crafted In Conflict that he’s completely in control. The record is akin to a film like Argo where the director doubles as the main actor. For all of Pallett’s work with other artists, it’s clear he saves his best themes for himself. He’s accepted a new role as the star.