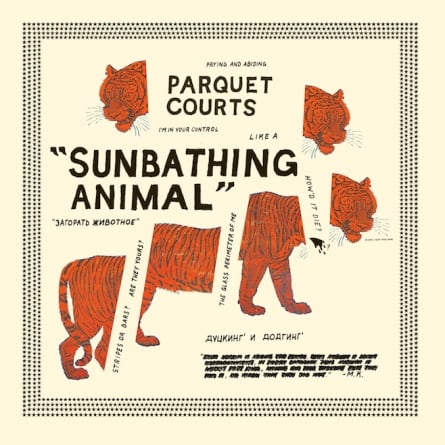 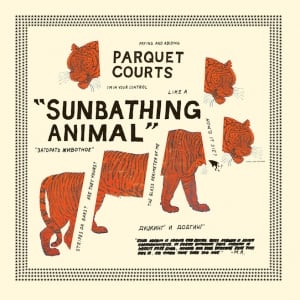 Last summer, I, like many, regularly thrashed around to the raw rock of Brooklyn’s Parquet Courts. The big city transplants battled against their own modest wall of punk rock testosterone and made witty odes about the city that never sleeps and never forgives. Andrew Savage and company buzzed so enticingly on tracks like “Borrowed Time” and “Light Up Gold II” that, unless the last record you bought was Pavement’s Wowee Zowee, it didn’t matter that the songs were pilfered from nineties indie-rock. Now with a solid support base, the band takes the opportunity to slow down on sophomore LP Sunbathing Animal. Not as immediately gratifying as their debut, the 14-track release finds the crew done searching the city for munchies, prime to discover something worth staying around for.

Guitarist Austin Brown admits that much of the album’s lyricism comes from life on the road. While the nonsensical album opener “Bodies Made Of” and the symbolic stripped-down foot-stomper “What Color Is Blood” literally look inward, many of the remaining tracks are about altered perceptions. The blues is strong throughout “Ducking & Dodging,” and so is the collective’s disillusion about being away from friends and family. That hard-earned wisdom also pulses through “Always Back in Town,” the verses of anguish shedding light on a group now unable to re-discover those freshly planted roots in Brooklyn.

For the first time, the band’s Texas roots poke through their adapted façade. For fans of Austin’s rich psychedelic-rock history, the harmonic infused “She’s Rolling” and sludgy-drone of “Raw Milk” are richly connected to precursors Roky Erickson and The Black Angels. But it’s not as though the quartet have grown weary and homesick from their time on the road. Despite the leisurely title, the song “Sunbathing Animal” finds the outfit at their most incendiary. Without even a moment to pause, the dueling guitars of Brown and Savage crash through the speakers. Then at just about one minute in, Savage flips the switch and loses himself in his brash guitar ambiance. The transition out of “Sunbathing Animal” is one of maturity. From lo-fi angst, the collective guide the album through the downtempo enchantment of “Up All Night” and the ultra-moody “Instant Disassembly”.

In less than four years, Parquet Courts have created a sound that is turning heads, a sound that is equally capable of fueling rowdy all-nighters and soothing temporarily tormented hearts. Go ahead and get wild to “Stoned and Starving” and “The More It Works,” and when the hangover sets in during the AM, Parquet Courts is still there with the charming melancholy that closes the album.