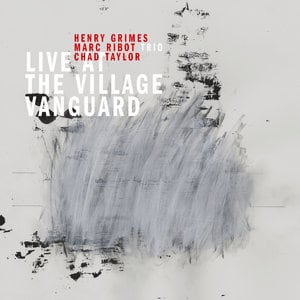 [xrr rating=3.75/5]The diversity of Marc Ribot’s catalogue and sideman appearances is so vast that even a basic summary could pad out the word count of the average review. Suffice to say that his experience with playing punk, no-wave, jazz, avant-garde, film composition and whatever it is you could label Tom Waits’ music makes him one of the most delightfully unpredictable guitarists in the world. There will never be another Robert Quine, but in terms of musicians at least sitting near the spotlight of the (relative) mainstream, Ribot is about as close as anyone living comes.

At first glance, Live at the Village Vanguard seems bizarrely pedestrian by his oddball standards. A collection of old jazz covers sticks out even from Ribot’s usual contributions to the genre with such forever-modern luminaries as John Zorn. But then, when those covers consist of material from John Coltrane’s Sun Ship and Albert Ayler, this isn’t the average songbook record. Backed by drummer Chad Taylor and bassist Henry Grimes, who returned to the Village Vanguard for this date after last playing 47 years earlier with Ayler himself, Ribot turns in an invigorating performance that displays his versatility in unexpected ways.

Grimes’ bowed bass opens Coltrane’s “Dearly Beloved” with an extended solo that never erupts but gradually builds steam until Ribot eases in with delicately plucked lines and Taylor plays bells louder than his light cymbal rolls. The tune takes off with a fiery lead from the guitarist that nonetheless pauses here and there to make sure the rhythm section keeps pace, and it is Taylor who truly explodes nearer the end with a ferocious drum solo. For the most part, it’s standard jazz interplay, but Ribot throws a quick curveball with Ayler’s “The Wizard,” launching into blues-boogie that eventually speeds up and warps into something closer to Mahavishnu Orchestra; there’s even a split-second breakdown reminiscent of the downshifting riff in “The Noonward Race.”

These left-field genre turns crop here and there across the rest of the set. The album’s centerpiece, a 19-minute rendition of Ayler’s “Bells,” finds Ribot laying down a rollicking tempo that could almost pass for electrified bluegrass were it not for Grimes’ sprinting bass and Taylor going wild on percussion around both his bandmates. Closer “Sun Ship” is the only time this set consistently resembles driving, free jazz, with stop-start sequences of ordered noise and strains of recognizable melody. Of course, relatable free jazz is still free jazz, and if this hews toward expectations, it is still sufficiently wild to constantly slip through the fingers every time you get a hold on it.

The strangest inclusions, however, may be the relatively straightforward performances of songbook standards “Old Man River” and “I’m Confessin’ (That I Love You).” Ribot plays prickly single-note patterns on the two songs, as if he were practicing the compositions’ skeletal for the first time instead of performing them live, but otherwise he and the band perform with a gentle, old-school tone. Ribot even chucks a brief interpolation of the “Turkey in the Straw” into “I’m Confessin’” to dig even deeper into American musical history.

The inclusion of the two songbook numbers may clash with the compositions around them, but as part of the entire set they serve a vital purpose: to argue for the far-out music of Ayler and late Coltrane as worthy of canonization alongside the standards they either left behind or warped beyond all recognition. If any word could describe this album it would be “reverential.” Ribot respectfully gives Grimes plenty of sonic space to flex and be heard, and as exhilarating as the renditions of ‘60s avant-garde jazz are, they are fundamentally tributes more than expansions. But the thought of living in a world where musicians casually pay homage to such songs is as forward-thinking in its own way as the continued exploration of territory first marked out nearly years ago.