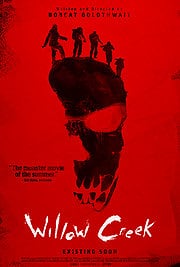 [xrr rating=2.25/5]We need another found footage movie like we need a close-up of a hole in someone’s head. The Blair Witch Project is to blame for both. There may be less nasal drip in Bobcat Goldthwait’s entry into the found footage subgenre, but his Bigfoot flick Willow Creek apes that 1999 game-changing cheapie right down to the nostril shots.

While found footage has proliferated in the last 15 years, at least a few recent pictures have gone with more inventive approaches. Norway’s Trollhunter shunned the usual lo-fi, micro-budget approach and utilized impressive CGI for its forest-dwelling monsters. The Last Exorcism defied conventions and was angling toward a far more incisive conclusion that pitted the psychosomatic against the supernatural, until the over-the-top ending toppled a fine setup. Meanwhile, Goldthwait’s last two films were highly subversive—both effectively, with the ink-black comedy of World’s Greatest Dad, and abysmally, with the tone-deaf God Bless America—while before that he was making movies about bestiality and demented clowns.

So you’d think Willow Creek—Goldthwait’s first foray into found footage—would at least attempt to turn an often-constrictive format on its ear. Instead, Bigfoot-hunting turns out to be almost exactly like tracking the Blair Witch. In place of film students, we have a romantically involved couple as the wannabe documentarians. Jim (Bryce Johnson) and Kelly (Alexie Gilmore, a Goldthwait regular) bum around a few haunts in the titular town where Bigfoot tourism props up the local economy. They interview a few “experts” and eccentrics (along with an elderly skeptic), while carving out time to indulge in a couple Bigfoot burgers at a greasy spoon, mock corny Sasquatch murals and pose in front of chainsaw-sculpted statues of the big guy. And then they head out into the woods.

In addition to blatantly retracing the steps of Blair Witch, Goldthwait also takes a page from the horror movie contrivances lampooned in The Cabin in the Woods. An unconvincing harbinger harasses the couple into turning back from their quest to hike into the riverbed where the infamous 1967 Patterson-Gimlin Bigfoot footage was shot. Of course, Jim and Kelly commit the sin of ignoring the menacing outdoorsman’s warnings and simply take an alternate route. Throughout the lighthearted first half of the film, Jim and Kelly banter about the Bigfoot legend between mostly stiff or overly silly “takes” for their film within a film. Jim’s a diehard believer and Kelly is a strong skeptic. Their rapport is loose and natural, and if this film transcends Blair Witch in any way it’s that the doomed documentarians are more genuinely likable (and nobody throws any maps into the river).

Though his film is entirely derivative, Goldthwait makes an audacious move in setting up most of Willow Creek’s horror within a single 19-minute take from inside a tent. What starts with Jim joking about making a sex video ends with a slowly approaching entity making contact with their shelter. Throughout the sequence, Kelly’s disbelief drains away as the “knocking” and “vocalizations” (standard Bigfoot behavior, according to Jim) grow closer and more menacing. Goldthwait deserves credit for taking a stab at mounting tension through unseen horror, but watching two people huddled together in a tent for 20 minutes (complete with a peek or two up fear-flared nostrils) grows tiresome.

And much like Blair Witch, Jim and Kelly’s attempt to escape their predicament the following day is thwarted by the inescapable vortex that is the horror-movie forest. A freak-out scene involving passing the same fallen tree after hours of wandering is almost directly lifted from its 1999 forebear. The abrupt and unsatisfying ending comes as no surprise as it’s a prerequisite of the genre, and an unexpected image in the final moments isn’t nearly as intriguing as it tries to be. The fact that Willow Creek is obviously unnecessary is even compounded by one of The Blair Witch Project’s directors releasing a found footage Bigfoot flick of his own at SXSW earlier this year. Sadly, there’s no homage, parody or commentary to be found in Willow Creek, just repurposing. With such great lore surrounding the cryptid, Sasquatch deserves far better treatment than an hour of retread and a 20-minute take of things going bump in the night.