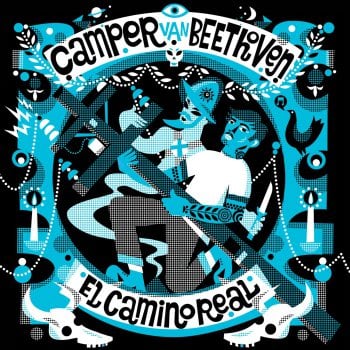 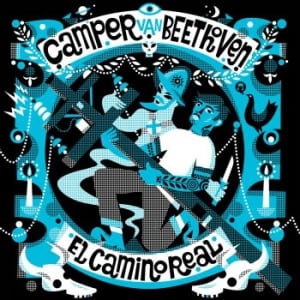 In their latest release, Camper Van Beethoven departs from the lost coast via the King’s Highway. Last year’s La Costa Perdita served as the band’s hazy appreciation of navel-gazing Northern California. By contrast, El Camino Real winds its way southward with less time or patience for hippy-dippy bits of psychedelia or introspective reverie. Instead, David Lowery and the boys settle into a busy swirl of purpose and angst. That’s not to say that they don’t face down some surreal moments. They do, but they quickly let them run their course and then move on. In fact, they leap the first hurdle right at the start. After a brief ambient soundscape, “The Ultimate Solution” takes off into a classic CvB sound, a bit like “Dustpan” from II & III (1986). The driving rock punch is thickened with violin and slashes of slide guitar. Lowery’s lyrics paint a prosaic picture of loitering boredom, but his chorus hits with a cold flash of anxiety and dissociation, where the ultimate solution is a nihilistic solvent rather than sideways Nazi reference. The song is chock full of random images from Korean girls to game shows, which provide some low-content entertainment, but it’s hard to tell whether they trigger Lowery’s upset or flow from it.

The next couple of tracks maintain the idea that any motion counts as progress, whether denying personal responsibility on “It Was Like That When We Got Here” or tossing out a plotless paean to action film cutouts on “Classy Dames and Able Gents.” At this point El Camino Real feels like it’s willing to settle for the trite Hollywood reputation: flashy and shallow, but hard to resist. Fortunately, the next tune, “Camp Pendleton,” is worth digging into. The thoughtful music is laced with an undercurrent of agitation, reminding me of some of El Ten Eleven’s recent work. Lowery’s vocal is understated as he casually delivers the first line, “I have dreamed/ Immortal suns/ I gazed upon their fiery surfaces,” and it merely registers as idle imagery. Soon enough, though, it becomes clear that his character is immersed in PTSD, tamping the pressure down and trying to cope. The arrangement and the lyrics work well together, utilizing cognitive dissonance to accent the surreal mindset; for example, “Pump up the violence / Bring the ordnance on down,” sounds as innocent as a pop song calling for a party. It’s a sympathetic, albeit disturbing perspective. A younger incarnation of the band might have relied on dark satire or righteous indignation to cover this theme, but this subtle approach is stronger.

El Camino Real is most effective when it finds the right balance between catchy tunes and nuanced darkness. “I Live in L.A.” deconstructs the town’s dreamy lifestyle in the verses, while the chorus caps it with an ambivalent response to Randy Newman’s “I Love L.A.” It’s an ear worm that hung with me well after it was over. This is followed by “Out Like a Lion,” with Lowery hoarsely channeling his inner Leonard Cohen. The chorus is a bit repetitive, but the deliberate pace and restrained tension complement each other.

Although there are enough strong cuts to carry the album, it feels more conventional than the group’s earliest work that made them college radio darlings. The exotic swirl of punk, gypsy folk and psychedelia from that era is only faintly echoed across these songs. Jonathan Segel’s violin gets a mild workout during the bridge jam for “Out Like a Lion,” but is otherwise relegated to accents rather than the heady melodies he’s contributed in the past. Tunes like folky “Sugartown” and the country rock of “Darken Your Door” hint at Camper Van Beethoven’s rootsy side, but they’re nowhere near as flamboyant as “Waka” (Our Beloved Revolutionary Sweetheart) or “No Krugerrands for David” (II & III).

According to an interview with bassist Victor Krummenacher, El Camino Real was born out of the La Costa Perdita sessions. As that album coalesced from a general California theme into a more regional flavor, it left a number of songs that didn’t fit No Cal ambiance. This set the band up for a quick follow on release. The net result is that it’s still worth a listen, but it’s hard to shake the sense that it’s more afterthought than aftershock.