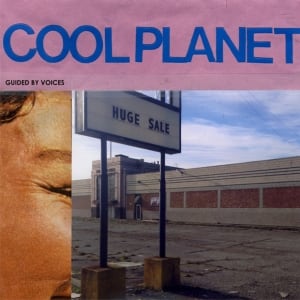 [xrr rating=2.5/5]It’s safe to say that any of the novelty behind a Guided By Voices reunion has all but dissipated. After the triumphant return of the “classic” lineup of the band back in 2010, Robert Pollard and company have effectively picked up where they left off in a number of ways. Starting with 2012’s Let’s Go Eat The Factory, Pollard has not only rolled back the years since GBV’s breakup in 2004; he’s also determined to willfully ignore the period in the late 1990s/early 2000s when he tried to be an honest-to-goodness rock star. Whether that’s for artistic reasons or out of deference to his returning bandmates–none of whom were around for “Hold On Hope” or “Glad Girls”–it’s left Guided By Voices in this curious position where they’re striving for the sound of old GBV while adding the experience that being longtime musicians naturally brings. Their sixth (!) post-reunion album, Cool Planet, follows this same template for better and for worse.

Some could argue that there isn’t a whole lot of difference between the new Guided By Voices albums and any of Pollard’s many solo projects, but that would be doing a great disservice to Tobin Sprout. He served as the perfect counterpoint to Pollard during the early years of GBV, and Cool Planet is all the better for his contributions. “Ticket To Hide” is almost vintage Sprout, reminiscent of classics like “Gleemer (The Deeds of Fertile Jim)” and “Awful Bliss,” while the stately piano ballad “Narrated By Paul” (Notice the theme here…) does well to break the hard-rocking monotony with something precious. Not that there’s anything wrong with rocking hard, though; when everything clicks for the band, as on the vibrant “Pan Swimmer” and “Hat Of Flames,” Pollard and company are almost turning back the clock. There are plenty of moments where GBV allow themselves to simply be GBV, and that’s where Cool Planet really shines.

Still, any Guided By Voices album is only as good as its filler, and Cool Planet has more than a few songs that simply aren’t worth revisiting. The plodding album opener “Authoritarian Zoo” sadly sets the tone for most of the album, as the band seems more than willing to just aimlessly slog through a number of these songs until they apparently didn’t feel like playing anymore. The cleaner, crisper production that Cool Planet sports does little to really help them, as Sprout and Mitch Mitchell’s guitars are overdriven and fuzzed to the point of indistinction, and it just doesn’t sound like Guided By Voices, or at least what one would expect out of this version of Guided By Voices.

It’s still good to see Pollard trying to do something new with his old band, and there’s enough good material on the past few reunion records, including Cool Planet, to justify this new lineup of GBV. But for every inspired moment, Cool Planet offers another that is just going through the motions. It’s great to have GBV back, but at this rate, they’re in real danger of losing the fun and unpredictability that made them so interesting in the first place.
by Kevin Korber