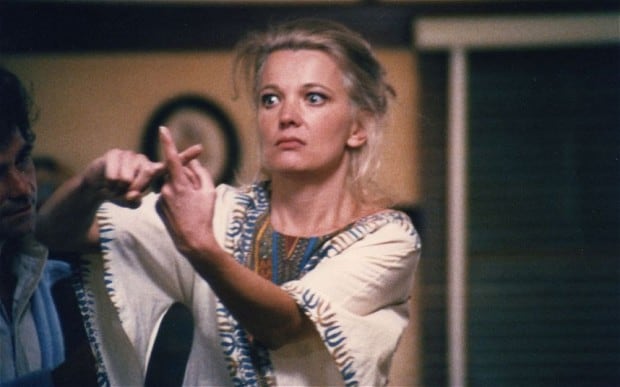 “Mabel is not crazy,” explains her husband Nick. “She’s unusual.” It’s been a long, difficult day of work at the city power and light company, and Nick Longhetti (Peter Falk) has promised his high-strung wife, Mabel (Gena Rowlands), a date night when he gets home. She has put on an opera record, hustled the kids off to her mother’s and gotten ready, but Nick never arrives, forced into an emergency overnighter. Disappointed, Mabel heads to a bar, acts a little strangely, gets too drunk and brings a man home with her — a man who overpowers her when she changes her mind.

In A Woman Under the Influence, Mabel want to escape her unhappy life, and getting drunk and flirting was just the first of many attempts. Frustrated and socially awkward, with an angry husband and literally no one to turn to, she retreats into dancing and song, plays with her kids, even asks her father for help in one heartbreaking scene, but none is forthcoming. Eventually she attempts, perhaps half-heartedly, to slash her wrists. None of these are even remotely satisfactory ways to escape her lot, but they’re the only choices she has, or at least all she can see for herself after constant attacks from nearly everyone around her, their demands for her to change and conform. Ultimately, Nick has her committed to an institution for six months.

That this mirrors the situation many women found themselves in during the 1970s and prior is no coincidence, but A Woman Under the Influence is never overt about its philosophies or politics. Audience reaction to Mabel has always been mixed, her odd behavior described as anywhere from quirky to clinically insane, but most agree that she is, as critic Tim Grierson once wrote, “quietly feminist.” Director John Cassavetes would likely disagree, and is quoted in the essential Cassavetes on Cassavetes as saying he didn’t care for women’s liberation, feeling it was a separatist movement that was biased and “spread distrust.”

Sometimes, though, the last person you want to ask about art is the artist, and whether Cassavetes would have liked it or not, A Woman Under the Influence is indeed feminist in tone, focus, even in its visuals. Mabel is frequently isolated within the frame as others, universally hostile, talk to her from offscreen or just barely in the foreground, their backs turned to the camera. Even her home is a feminist commentary, looking like an American Arts and Crafts style house converted into a business, with stickers on the front door and a kitchen made to serve a couple dozen at a time; just walk on in, folks, her household and all that’s within is everybody’s business.

The plot, such as one even exists, is mostly linear, though moments elided via editing chop up the events, occasionally softening the trauma; more often, though, the erratic editing highlights everyone’s emotional confusion. Still, A Woman Under the Influence can be episodic to the point of being old-fashioned, recalling films and television of the 1950s, with Nick and Mabel as a perverse Ozzie and Harriet for a new generation. Like Ozzie, Nick appreciates his wife, but when it comes to enumerating her qualities, lists household work and nothing more; unlike Ozzie, when problems arise, Nick never has the right answers. 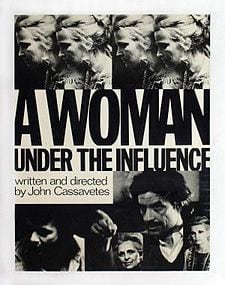 It’s not that Nick doesn’t love Mabel, because he clearly does, and as we get used to her affectations we understand why Nick is drawn to her. But this understanding and alliance with Nick means his solutions — all of which are absolutely rotten — confuse us and break our hearts. This is heightened by the cinema vérité look of the film, with non-actors populating the background, lines that seem improvised, actions that look spontaneous and important dialogue offscreen as though the camera didn’t catch it in time. A Woman Under the Influence bears all the hallmarks of a documentary that can only work with the limited footage they have, but it’s all an illusion, the result of careful editing, writing, aesthetics and casting by Cassavetes.

And it is Cassavetes’ casting that carries A Woman Under the Influence furthest, with Falk turning in a shocking performance as the confused, abusive Nick. The unquestioned highlight of the film is Rowlands’ performance, though, as a character difficult to connect with, even embarrassing at times, yet sympathetic and understandable. Rowlands extends herself tremendously with her performance, not just indulging in outward manifestations of being troubled via clothes or hair, but putting her whole body into it, from the get-outta-here thumb gestures to the barely-perceptible defensive posturing. It’s an absolutely revolutionary performance, one of the best ever committed to film.

A Woman Under the Influence was a game changer, not just in its outstanding performances but the innovative techniques and its absolute refusal to indulge in Hollywood tropes. It’s also a deeply uncomfortable film. Forty years on, the Longhettis don’t seem so unique anymore, and for all the talk from fans, critics and Cassavetes himself that the film is about love and togetherness, those who grew up with some variation of Mabel and Nick as their parents understandably struggle with the film’s romanticism. The casual domestic abuse is presented as just one of a host of common, yet exaggerated, familial struggles, but without any acknowledgement that there is a future beyond the frame, that Mabel’s and Nick’s generation in turn leads to another generation struggling to deal with some pretty troubling childhoods. Leaving the future undecided is part of Cassavetes’ deliberate attempt toward the dismantling of the Hollywood version of love, of course, and perhaps also a critique of Hollywood’s history of using spousal abuse as either a joke or a necessary tool within marriage.

Most importantly, it’s a necessary tool to convey the lunacy of a culture that considers Nick’s behavior socially acceptable, while his wife, who dances on her couch and looks elsewhere for love and gives a few people the raspberry from time to time, has to be isolated, for the good of all society. Everyone around her, from Nick to her mother-in-law to neighbors and coworkers, do terrible things, and no one seems to realize it, with the exception of one woman who can barely be seen or heard, and who finally, if briefly, gives Nick the what-for he deserves.

It is impossible to overstate how groundbreaking the cultural commentary in A Woman Under the Influence was for its time, especially in a film almost entirely free from major tropes and commercial concerns. Cassavetes once said he specifically removed romantic scenes between Nick and Mabel because he didn’t want to give people what they wanted, and as evidenced by the film’s reputation even today, he more than succeeded in denying the audience any resolution. We get no excuses or explanations in A Woman Under the Influence, no one makes any promises to change. There is nothing but the temporary relief of a battle ended, with the understanding that the fight will happen again.